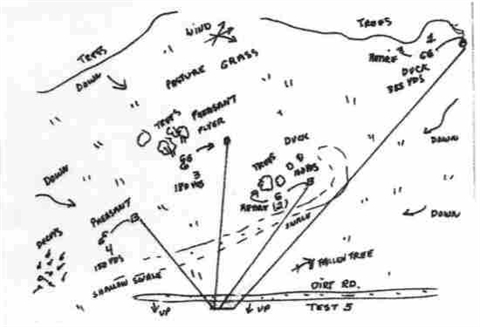 Test 5 - A land Quad With Two Retired guns
The rain had ended overnight but skies remained threatening. It was in the mid- sixties and humid as test 5 formed an a rolling field at the LeGrand Ranch. It was dubbed the "coffin" field because of a formation deep within it. Slowly a land triple with two retired guns emerged. At first glance it appeared the "coffin" title might apply to the test as well.

Judges readjusted the gun stations, order of throws and moved a stand of 10(?) silhouette goose decoys from far right to far left between or after test dogs ran. The order of the throws were: Far right retired-dead duck angled back right, 385 yards our; middle right retired- dead duck angled back  right a bit 160(?) yds. away; middle left flyer - a shot flying rooster thrown right about 180 yds(?) and left mark- a dead rooster angled back right about 150(?) yards.  The wind angled back across the test from left to right.  Because of the humidity , 4 marks and possible long hunts, judges scrapped the honor they had originally included.

The test began shortly after 8 a.m. with dog #75 and took about 12 to 15 minutes to complete. Because there were 76 dogs to run, it is doubtful that the test will be completed today.

Handlers took the marks in various ways and some dogs "selected "on their own. It appeared the most successful ones took the outside birds first, then the middle ones.  The flyer pheasants were difficult to wind and hunts could diminish memory of the others. Some blew through one mark and another and were reluctant to handle back into the fall. While the test dogs were moderately successful, when the decoys were moved from right to left, it opened up the right area (no "slot" between them and the middle mark line). Dogs pushed far right to avoid the close line between the right middle and far one, drove up to the woods and became lost

It is reported that out of the first 25 dogs, 4 picked up, 6 double handled, and only 3 did it without handling. Lyn Wharton and Dyna were one of them! Unfortunately, one dog, Chickamauga Choo Choo went down in the heat and needed serious attention. Hopefully she will be OK.

The test was suspended after dog 50 had run. No partial call backs were given and there are 20 left to run in the morning. It will be a long night for some - the "coffin" field is taking a toll.