Wednesday arrived clear, calm, and sunny. Temperatures were in the mid-50s.

On site, near the stream where Brad Clow had fallen in Tuesday, a sign warned NO SWIMMING! with a cano speedo draped over it !

A test dog scheduled for 7 am ran without a few of the early contestants. As a number of workers and contestants had been held up in a sheep drive down the middle of the road. Understanding judges gave them some time to view the line and the first dog, number 26, appeared on line at 7:33 am.

Early, there was no wind and the dogs did very well. However, it quickly rose and within an hour, dogs began having difficulties. They would split the difference between the left and middle mark and either hunt or handle. The last dog, number 55, completed at 10:43 am. After honoring for the by dog, handled by Ken Payne, no dogs had broken on the honor. Of this morning's dogs, 5 handled and others had rough work. Callbacks were to be given in the gallery. They came about a half an hour later and listed 79 survivors back for the fifth series.

Dog number 83 would initiate the fifth series. A land blind to be held directly behind the site of the fourth. The line was set on a high hill and the land rolled down to a hill portruding from the right. There were heavier patches of sage brush beyond the hill. To recover the blind, the dogs had to tread their way through the tall tangled sage brush to the base of the hill and past the rising hill on the right. Deep beyond the hill, the duck was planted, marked by a red stick, about 305 yards from the line. 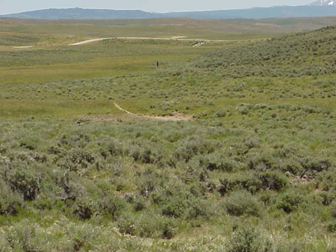 Test 5 - Land Blind, Planter shown at blind
The first dog, Wayne Bleazard with UFO, tried the test at 11:55 am. The blind had been longer, but after, the judges moved the blind to its current position at 305 yards. It took about 3 minutes per dog to complete the test. The first running dog, number 83, stepped from the blind at 12:20 pm.

Thick sage and a larger bush in front of the line deflected dogs from a good initial start and prevented the maintenance of any line. A heavy wind blew from right to left across and into the line. However, dogs did not seem to fade with it, but instead pushed against it and headed for the distant hill. Once off-line, it was difficult to change a dog's mind and put him back on line. As they neared the hill, it was easy for them to slip behind the hill and become unseen in the distance.There was also a dip that ran parallel to the base of the hii. Yhere dogs would fo out of sight for a split second and could reappear off line to the right. Handler dilligence was needed. When in the area of the blind, the wind seemed to switch and a number of dogs passed it without winding it, even when apparantly on the appropriate side of the wind. If they got too deep beyond the blind, they had difficulty hearing the whistles and there were a number of refusals.

The fifth was completed about 5 p.m when dog 82 returned to line with his duck.It was announced that the callbacks would be given at the Workers Party sometime this evening.

The sixth was rumored to be either a land triple or quad at the Castle Rock Ranch. The first running number would be 11. Test dogs at 7 a.m.