Test 4 -- Water Blind
TEST SITE IS SPONSORED BY KELLEHER FORD SALES. We do thank them for their support and for supplying the judge’s vehicle.

The cavalcade arrived at the test site at grounds #1 at 7:30 AM. The wind was light from the SE, the sky was heavy overcast and the temperature 14 Celsius.

Test 4
The judges had a water blind set up. The running mat was back from the water’s edge by about 7 yards. The line went through a small piece of water and over a point at approx. 15 yards. The line then carried to the next point at 70 yards, past this point the line carried to a third point at 160 yards, and past this for aprox 50 yards to the bird which was planted at the edge of the water. The total distance of the blind was 211 yards. The first test dog ran at 8:00 AM. RAINBOW’S BLUE M & M’S handled by AL PETKAU displayed some of the challenges of the points and the lunging water. The judges made some minor changes to the location of both the bird and running mat placement and GUNSTOCK’S COTTON GINNY handled by P.J. FITZPATICK ran the second test dog. She did a very good job. Further adjustments were made and the first competitor, dog # 3 POKOLODI’S GO GO SALLY handled by BOBBY LINDSAY came to the line at 8:25AM. 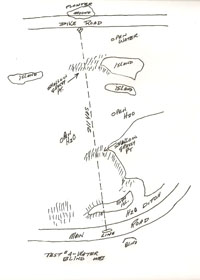 Sketch of Test 4
There was some excellent work displayed by the teams on the blind. As well, some dogs were pushed toward the shore and were challenged by the casts into the wind. There was one pick up. The average time to complete the blind was 6 minutes. The wind shifted and came out of the east and increased to approx. 25 kmph at times. At around 10:30 a rain squall came through and people were scrambling for rain suits and umbrellas, fortunately it did not last long.

The last dog picked up the blind at 12:20 pm and it was confirmed that this would be the only test of the day. People could now rest and prepare for the workers’ party, which will be posted tomorrow.

CALLBACKS: Numbers 6, 36, 43 and 45 were dropped, 34 dogs remain in the competition. The marshal announced that dog #13 would be the starting dog to run test five. 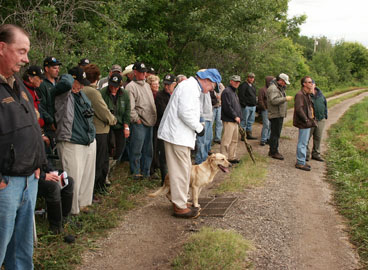 Running of the test dog at test 4
Worker's Party

After today’s test, contestants and workers enjoyed a leisurely afternoon preparing for the Workers’ Party sponsored by Brandon Retriever Club. The chairperson, Dawne McKenzie, opened the ceremonies by thanking Nestle Purina, the official Dog Food Supplier for the NRCC, and their reps. Tim Crone and Lauralee Camilleri. Their support for the 2008 National Amateur is much appreciated and crucial to the continued success of the National Retriever Club. She also acknowledged Eukanuba, another Official Major Sponsor of the NRCC and thanked John Sharpe for their involvement with the trial. Everyone is appreciative of all the hard work that Tim and John have done this week. They have been out in the field taking turns with the gunning and throwing in addition to their own preparations. Dawne also thanked Tri-Tronics, the official e-collar supplier to the National. Another special thank you went to Winchester, the official ammunition supplier to the NRCC for their poppers. She also thanked the many local suppliers and all the people who have worked so diligently for many months to make this National the success that it is. 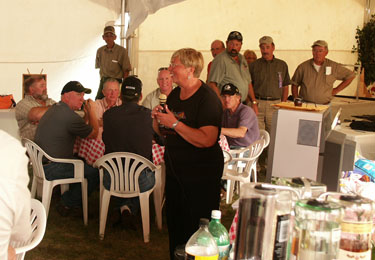 The Silent Auction ended tonight at the Workers’ Party. Bidding was brisk thought out the evening, as Chuck Lapensee, President of the Brandon Retriever Club, kept things moving along by pulling items throughout the evening. AL Petkau, Finance Chairman, had no problem keeping up with the pile of bidding sheets that Chuck was gathering for him.

The Brandon Retriever Club, competitors and workers would like to thank ROGER EBBERT for arranging the water tank which was delivered by CFB SHILO. CFB Shilo was very cooperative and members were dispatched to fill the tank as soon as they were notified that it was empty.

The competitors and workers enjoyed themselves with a dummy toss competition after the meal and presentations. There was lots of laughter as the teams attempted to toss a dummy into a garbage can. At one point, someone asked if being close to the can could count like in horseshoes or hand grenades.

Dummy toss game
There was a karaoke machine set up in the hospitality tent. People moved in there as well and listened to some interesting singers from the crowd. 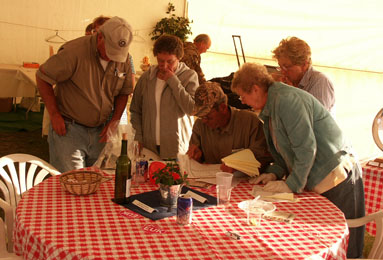 The Treasurer hard at work