The devil takes over all of us when the songs we hold near & dear to our hearts come on and we have an ability to pretend stardom. That was certainly the case this evening, as everyone joined in the fun. Forget Canadian Idol, we have discovered new star talent in the Field Trial World. Kevin Cheff & Howard Simpson, Linda Shlemkevich, Richard Dresser, Val Chappell, Andrea Smith, Bill Kennedy, Jerry Younglove and our host John Sharp ( Eukanuba / Iams) will be going on tour and be visiting a town near you soon!! They will be bringing along with their backup singers Diana Howard, Jane & Dave Thompson, Judy Peter Mottola, Connie Dresser, Lynne Hare, Marg Murray, Navajoe Katie Dygos, Barb Younglove, Marty Kress, Lise Langlois. Also on tour will be our groupies Paul & Alma Lalley, Fred Benjaminson, Leona & Ron Modesto & Jim & Meg Liviski. Our judges Rick Cardinal, Chuck Lapansee & Gord Benn stayed out of the limelight but enjoyed the festivities stating they had been in the limelight all day!! Great snacks and fun were enjoyed by all.

Test 4 - Water Blind
There was no caravan this AM. The test site was again located on the property of Reg and Marg. Tivy. The weather was cool (10C) with overcast skies and rolling ground fog, with the wind out of the NW and very light. As the day progressed the sun came out around 10am and the fog disappeared. The winds switched from light NW to NE about 5km/hr around 10am and to the SE at about 10km/hr by noon. Rain descended on us at about 2:30 when there were about 10 or so dogs to run. 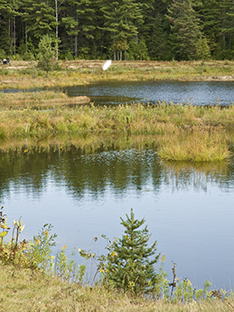 Test 4
The test ran south to north and the starting line was on the dike and using a pond on the opposite side of the dike from yesterday’s Water triple. The line was located about 10 ft from the road over the dike. It was a beautiful big pond with islands and points and surrounded by nice tulles and low cover. The blind ran along the west side of the pond incorporating the 3 points along that side and ended about 20yds up a gentle slope at the north west end of the pond. There was a small pine directly on line to the water entry. The line to the blind was over the road, down a lightly covered slope, thru some tulles at the waters edge. Then across a little bay to about halfway down the first point. Then over the point and staying in the water past the other 2 points to the end of the pond and up to the bird.

The Official test dogs ran at 7:30am and Connie & Val did a great job handling to show the handlers the pitfalls of the blind. The first running dog, Dog #1 started at 8:20am after a short fog delay. Visibility was OK but not great and we had a few delays between dogs as the fog would roll in & out. That seemed to clear after about 8 dogs had run. The work was general good and consistent. 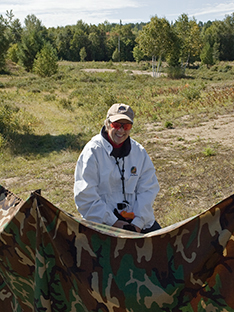