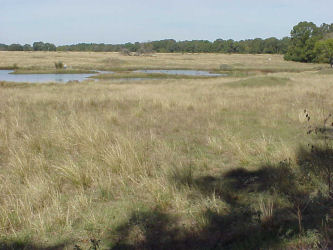 The line was atop a mound and faced a rolling, irregular pasture with a good sized pond in the middle  There were a number of mounds in the fields on both sides of the water and three peninsulas protruded from the near side of the pond, angling back to the left.  Two sets of guns were stationed across the water. On the left, two guns stood on the shore. They shot and threw a dead duck flat to the right, across a small inlet. It fell on the shore about 150 yards from line. . Quite deep to the right a second set threw a dead duck angled back to the left where it landed in pasture grass 200+ yards away. Far to their right and closer, on the near side of the water, a group of live guns shot a flying mallard angled back to the left, also landing in pasture grass 140 yds away. The order was: Long middle, left dead, right flyer. The two dead bird gunners retired as the dog was sent for the flyer. There was also an honor on the running dog's left.

Multiple changes of cover, the mound and peninsulas deflected dogs from retaining a positive line. Since the two retired marks converged, it was easy for dogs to start for one, then go towards another. After an early dog handled on both, the rest of the participants were quite concerned. Happily, many of the following dogs seemed to remember the marks and recover them.

By 2 p.m. completion  time had picked up although there was no chance of completing the series today

The 4th was suspended at 5:25 after dog 49 was released from the honor.  There are 20 remaining for tomorrow morning. Test dog at 7 a.m., first running dog, number 51 shortly after. No partial call backs were given, as announced earlier. Test 5 is rumoured as a blind (s). It will begin with dog 18 or the next closest to it.