Completion of Test Three
The last dog to run, at 5:05 P.M., Monday, on the water triple, was dog number 76.  Twelve dogs remained to run Tuesday morning.  Eleven dogs had handled in the first 68.

The weather is predicated to change, for the worse, with storms hitting the High Sierras and rain in the valley later today.  Jewell Easter and AFC Cucamonga's Thunderbolt were called to the line at 6:40 A.M.  He was the only test dog to run.  Dog number 74, a re run was called to the line at 7:00 P.M.  There slight delays between dogs because of early morning sun.  When the sun went behind a cloud a dog was run.  The wind had changed and was blowing from left to right and pushed some dogs to the right resulting in some hunts behind the long right hand gun.  There were no hunts behind this gun on Monday.  Two dogs handled on the middle retired gun this morning, for a total of 13 (16 per cent) and the test was completed at 8:39 A.M.

A short distance from the water triple a water blind had  been set up and the gallery, workers and contestants were quickly moved to a site overlooking a series of ponds, with low dams between them.  The dogs were run from a mat  and could  not see the water, down a gradual side hill sloping to water on the right, across a road, by two ponds on the right and a gunner, sitting in a chair on the left,  just before the entry to the water.  The entry was over a low mound and the dogs would be out of sight for two or three seconds in swimming water.  Running water was immediately to the right, near the far right hand bank.  The dogs would then go through a few yards of running water, cross an island very close to the right hand bank, and parallel the bank, in running water, for about 50 yards.  They then crossed a point and narrow running water channel to the blind, immediately out of the water.  The distance to the water was 150 yards and total blind  250 yards where a drake duck was planted.  The blind planter was located to the right and slightly deeper.   Handlers were allowed to move forward after their dogs  had gone over the hill.  The wind was from left to right.

Jewell Eater and Thunderbolt started at 9:15 A.M. with Alice Woodyard and her test dog Sniper following.

Bill Eckett and dog 27 were the starting team and began the series at 9:35 A.M..  Early dogs showed that there was tremendous push to the right, because of the side hill, pull of the ponds on the right, person in the chair and the wind blowing to the right. Several early dogs had a lot of left overs and ended up on the bank to the right edge of the island.  It was obvious the judges were going to get plenty of separation and finish the blind this afternoon.  The average time will probably be less than four minutes per dog.  Of the early dogs 32, 34 and 35 had very good blinds.

This test ,like all of the previous tests, allowed the gallery to have an excellent view of the test.  This was a primary concern in setting up the tests.

Test four ended at 3:05 P.M. with dog number 26.  The dog work during the last part of the test was similar to the first.  Most of the dogs wanted to go to the right.  There were several dogs who wanted to avoid the water all together and went left.  The major traps in the test were probably the person sitting in the chair and the crosswind.  They pushed most dogs, forcing them to the right of the island.  The cast to the left, off of the island, was very difficult, with most of the dogs going straight back and ending on the land behind the island.  Code Blue, number 68, had a very good blind.  Call backs will be given at the Ramada Inn.  A water triple that will take all day will start at 6:30 A.M., Wednesday morning. 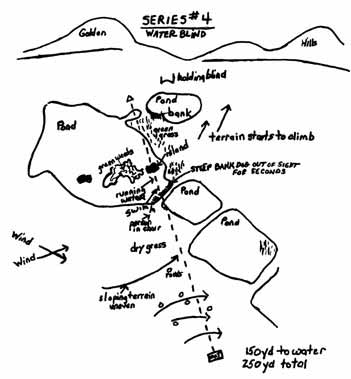