Tuesday arrived warm and cloudy.It had rained over night and intermittant showers were forecast for most of the day. Temperatures hovered around 60 with about 75 predicted for later in the day. 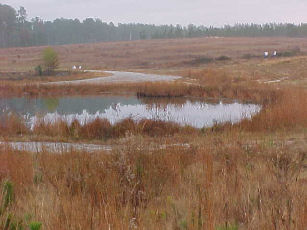 Test 3 - close up of retired guns
Heavy clouds darkened the site considerably, but the test dog ran about 6:45 as scheduled (no problem). However the judges decide to wait for a little while for conditions to improve. At 7:10 the first running dog, #14 appeared on line. Conditions appeared much the same as on Monday except for lack of wind and number three was completed at 8:37 a.m. when dog #26 returned to line. In all there had been 19 handles an/or pick ups.

The test was constructed as the cars were reparked a short distance to the left of where they had been. Intermittant rain was light, but not well received by most. Later the sun reappeared occasionally and it became warmer.
The 4th series faced the same rolling field from a different direction. It was a long angle entry water blind. The line was on top of a hill that rolled down to the right shore of a pond. A wide penninsula protruded from the right with a receeding shore on the back side. Beyond was another bay and behind it, a spit of land extending from the shore. The bird was placed on the spit without a marker. Contestants were told it was in line with a short dead tree that was between two taller ones on the far shore. A pair of gunners sat on the far side of a gravel road that wound arond the shore. They were also were the blind planters as the spit began a short distance in front of them. Empty bird crates rested by their side.

To recover the bird, dogs had to angle down the slope of the hill, enter the near, small bay, then get back on land to the right of a boat on the edge of the shore. After, they had to cross the penninsula , re enter the water and swim to the spit where the bird lay about 175-200 yds. from line (guess). Along the way were a number of opportunities for the dog to go out of sight and the wind blew toward the shore.. Contestants were instructed that they could move laterally only.

The first test team of Mindy and Candy ran at 9:08 follwed in quick succession by Burke and Zoom. Both had numerous whistles, but good control. It took 4-5 MPD to complete

Dog 47 initiated the series at 9:20 a.m. The first few dogs needed a number of whistles to keep them on line and on their way to the water. It seemed obvious that judges expected dogs to exit the near bay to the right of the boat and early handlers directed their dogs accordingly. A number of dogs ran toward the gun station instead of angling down the hill toward the water and early correcyions were needed. Others took fairly good lines down toward the shore but slid along the edge, ignoring the left casts into the first bay. A few never got in that bay and ran across the land, out of control to the far shore. Most got in there, but with various degrees of success.

By 1:43, the fourth was completed as dog 45 returned with his duck.

An announcement was made that a Land blind would be run in the area of the combined first and second series. Participants were asked to wait until callbacks were given and all would caravan to the fifth series site. Once again, callbacks came swiftly and 10 dogs had been lost- 53 potential NFC's remained. Those dropped were: 3, 5, 10, 15, 22, 37, 55, 61, 62, and 73. 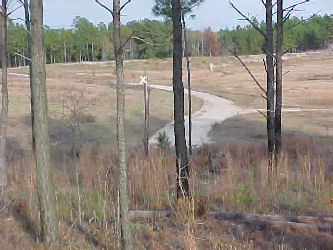 Test 5 - Land Blind
The fifth was ready as the caravan arrived. It was held in an area to the right and behind the second series blind. The line was located on top a knoll in an area randomly dotted with tall sapling pines. A large wood pile was a short distance down the hill to the right of the line. Two logs lay to the left of the pile and were on the way to the blind. Beyond the pile, the hill dropped off to the field below. There was a sandy road with 2' high edges winding through that area . The blind, a rooster was planted across the far road and marked by a 2-3' pine seedling about 175 yards away (X).

The test dogs tried the test about 2:25 pm and clearly demonstrated a number of pitfalls culminating in one being picked up. It took only about 3 minutes to complete. The first running dog, #68 came to line at 3:35.

It was difficult to get a good line. Dogs either wanted to go to the right or square the road when going left. Both directions needed an early correction. If they squared the road, they were well off line and had to be cast to the right. It was an into the wind cast and some would scallop back instead of truly correcting their line. Once near the road, dogs tended to slide along the near side instead of crossing it. After crossing the road, dogs could be out of sight behind the cover and sand ridges lining it. Some ran, unseen, along the backside appearing well out of the area before the handler could find them. A sunny period prevented dogs from seeing their handlers and the casts they frantically gave them.

By 5:10, all 53 had run and number 5 became history when dog 66 returned to line. After, it was announced that callbacks would arrive later in the evening. Wednesday there would be water marks at Moree's Game Farm. A caravan would leave at 5:30 from the Wal-Mart parking lot .

Callbacks arrived after supper and 4 had been dropped. Forty-nine were still in contention. Those lost were: 20, 29, 34 and 79. Unfortunately Carbon Copy of Horn Creek was among them. Dog 21 will start in the morning.