89 Starters scheduled to run Series One Land Triple. Tuesday's weather was overcast in the morning with partly cloudy to sunny in the afternoon with winds ranging from 20-40 mph from the south and west. Temperatures ranged from the thirties to the fifties, with colder temperatures and stronger winds in the afternoon.

Recap: The First Series was in the "Triangle Field" and was a Land Triple that was a vertical rise with the elevation ranging from low left-hand gun station to a high right-hand flyer gun station. The first bird thrown was the middle bird, a dead hen pheasant, thrown from right to left at 189 yards. The left hand guns were stationed in front of an "island" of sage grass, thick brush and trees. The gunners threw a dead hen pheasant from left to right at 148 yards in front of thick brush into tall sage grass; the gunners then sat down and retired. The last bird down was the right hand hen pheasant flyer at 201 yards, shot from right to left toward a tree line.

The path to all birds was across a dirt road below and twenty yards in front of the line and required the dogs to negotiate varying terrain and cover to each bird. A wide ditch with heavy cover ran downhill from behind the right-hand flyer station, curving leftward in front of the middle bird and left-hand bird leveling off on the left toward the dirt road. Large branches of trees were cut and laid on the road and in the path to the left-hand bird.

All three birds of the Land Triple gave many dogs problems. On Monday, there were huge and long hunts on all three birds, particulary the left-hand retired gun and the right-hand flyer. On Tuesday morning there were not as many long and huge hunts but there were approximately seven dogs that handled. Approximate statistics for Series One: 3 pickups, 21 handled on one bird, 3 handled on two birds, and 2 switches.

76 Dogs called back to Series Two & Three Land/Water Combination Blinds. Series Two, a left Land Blind, and Series Three, a right Water Blind were run concurrently. A poison bird was shot from left to right toward the left Land Blind. Series Two & Three began at 12:10 P.M. with Dog No. 55. Average time for the test was eight minutes per dog. The test was suspended at darkness at 5:00 P.M. after Dog No. 9 ran. 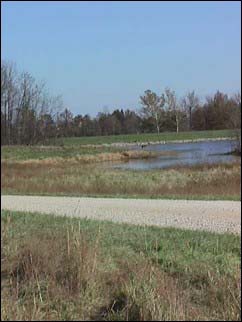 Series Two Land Blind &
Series 3 Water Blind
On the Land Blind, many dogs were pushed to the left by the water, although some dogs did take some water on their line to the blind. The work varied from very good to very poor with three pickups on Tuesday afternoon. The tremendous winds and cold water affected the dogs in various ways, and although not present in the bay, there were whitecaps in the lake at the end of the blind. The difficulty of the test and the weather conditions were demanding for both the dog and handler. 36 Dogs ran this test on Tuesday, with 40 dogs remaining to run on Wednesday morning. The test will resume at 7:00 A.M. on Wednesday morning with Dog No. 10. No partial callbacks were given.