Tuesday arrived sunny and warm with temps an the mid 60's at 7 a.m. The second series had an early start. The test dog rant at 6:45 with the first running dog, #22 appearing at 7 a.m. The series was well lit by a rising sun, but the handlers were in the shade (early). However the work was quite similar to the previous day even though there was little wind. (By the way, I forgot to mention yesterday that the test was a walk-up. As soon as the handler arrived on line, guns said "guns up" and the dry shot was fired.) The remaining dogs were run quickly and test 3 was over when dog 21 returned to line.

Down the road, a water triple was being created as judges reviewed their call backs. 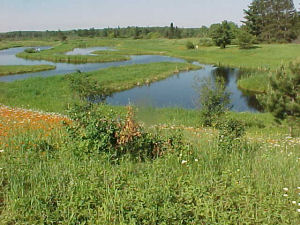 Close up of retired gun marks
The line for the Fourth series water triple was st on top of a sloping shore that faced a large body of technical water below. The first set of guns were on a curving peninsula on the left (in the pond). They shot twice and threw a dead duck sharply back to the right.It landed in medium tall grass about 210 yards from line .A second set was located to their right, on the upper slope on the far shore. They shot once and threw a dead duck to the left - it fell on the grassy slope nearly 175 yards out The third set was also on the far shore but a good distance to their right. They shot a flying duck angled back to the left. It fell in fairly tall grass about 100 yards away. As the dog was sent for the flyer, the other two guns retired to brushy blinds near them The order was: Left, Middle, right. A light, changing wind blew acoss the test from left to right.

The test dogs were called to line at 9:25 a.m. Both handled on the left mark. After letting participants view the line, the first running dog, #71 appeared on line at 9:55 a.m. The test took about 10 minutes to complete and there was an honor on the left.

All birds caused some difficulty, but the left retired mark was the most troublesome. Early handlers took the middle bird first, probably because it was shorter and dogs could possibly wind it if they went deep on the left mark. However after 19 dogs had run, 12 had handled while 4 in the group clean work.. They were the ones who took the left bird before the middle mark. Wind and ability may have been part of their success, but later handlers seemed to pick up on the trend and more dogs became successful. A few dogs went into the "no man's land" between the marks, but most recovered on their own.

About 5 p.m. it became apparent there was little hope of completing the fourth in one day but Judges had not given a cut off time. Later an announcement was made that the last dog would be #41. The other 18 would run tomorrow. Test dog at 6:45 and first running dog, #42, at 7 a.m. No partial callbacks were given.. Up to this point, 19 dogs handled on the 4th and none have broken on the honor. Number 41 completed at 8:05 p.m.