Tuesday arrived clear and sunny with temperatures in the 50's. The remainder of the third series was completed by 9:45, but callbacks were not given until the caravan arrived at the LeGrande ranch, site of series four. It had ended with number 22, FC AFC Caernac's Mr Now Wiser as he had two no-birds. 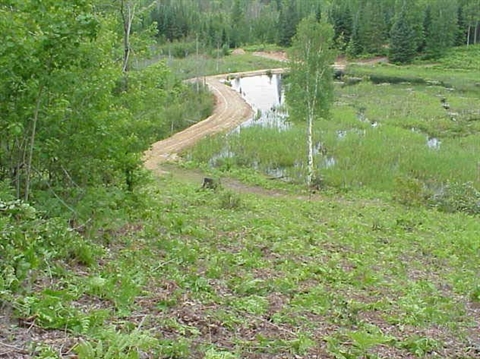 Test 4 - Water Blind
The fourth was a water blind with a long angle entry into a grassy pond from on top a steep hill. At it's base was a curving, dike road which had been scented part way down it on the right edge. The bird, a dead hen mallard lay in front of a distant mound of dirt, about 200 yards from line. A switching wind angled from left to right or right to left across the test. The test dogs ran shortly before 11 a.m. and both did fairly well. By 11:04 dog 50 appeared on line to initiate the fourth which took about 5-6 minutes to complete

Dogs would build momentum running down the steep hill and onto the dirt dike road at the bottom left with a grassy pond to the right. There was a low stump on the side hill directly on line. At the base, the line was through a small bay, then back on to the road. The road was online for a good distance (15+ yds?) but the line kept going straight, into the water, where the road curved. Some dogs would have preferred to to remain on the road while others wanted to go "fat" into the right hand water. There was a stump in the water to the right just off shore, which was about  where the dogs should enter the water. At that point they could also wind the scented shore. Some needed a whistle or two to get wet. Others took a big "over" and had to be cast left to be back on line. Once on line, most swam to the far shore of the dike with only minor adjustments. The land beyond was rough, mucky and had brush pile just to the right of the dike's backside. There dogs would lose their line trying to work their way through the cover and mud.

Early dogs appeared to do surprisingly well with perhaps one in five having some difficulty. By 2 p.m. clouds had returned and a few sprinkles fell. After about a dozen had run, a scent trail and path had formed from the far side of the distant dike to the bird. Once to that point dogs would drive to recover the bird.

Series four was hampered by strong winds and driving rain during mid and late afternoon. Dog work remained fairly similar to that prior to the storm. Call backs came after dark and 76 dogs remained in contention. Seven more had been lost. They were: 2, 10, 21, 31, 47, 59, 71, and 84.

Series Five will be held in the same gerneral area as test 4 at the LeGrande ranch. Dog 75 will start. The test will consist of marks, probably land.