Test #3 Water Triple
The cavalcade arrived at the test site at 7:30 AM. The wind was light from the SW, the sky was clear and the temp was 16 C. This test site was sponsored by Bird Tail Waterfowl, Paul Conchatre, owner/operator.

The judges had a water quad set up with one retired gun. First test dog, at 7:40 AM Revilos Gunz N Roses handled by Marg Murray, had a small hunt on the 3 rd bird and did an excellent job. Ed Zeerip with Bluenorth’s Alces Americana ran 2 nd test dog. He had a small hunt on both the 2 nd and 3 rd birds.

The work was generally very good on the two visible guns and varied extensively on the retired gun. There was a wall of tall cover behind the retired bird and a few early handlers, handled. Later on handlers let their dogs go and they seemed to work their way back to the retired bird, although some were out of sight for a while. By mid afternoon the temperature was very hot at 27 C and the humidity was starting to build.

As the afternoon progressed and the sun changed, the work improved considerably. In total, 8 dogs handled on the retired gun.

Today we had two dog handlers visit the championship site from Melbourne, Australia. John and Vicky Lawton are visiting in Canada and when they heard about the National Amateur Championship they decided to see how we trained our dogs in comparison to the Australian way. They will be in the area for the entire week so we are sure to see more of them in the days to come. Welcome!

The evening ended with a great supper provided by the Portage La Prairie Retriever Club. We all dined on fish and chips and enjoyed our fellow trialers’ company. 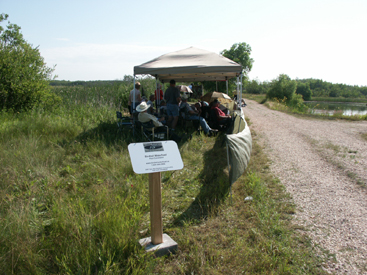