Test 4 - Land Quad
The caravan left about 7:15am under less foggy but still misty conditions. Temperatures were mild at 60 degrees. The test site was located about 5 kilometres away in a hayfield with many large round bales. At 8:15 test dogs were called to line to run a fairly short but tight quad with two retired guns. The 3 stations on the left side were in line with the short and longest retired. The short bird was quite close to the middle station. Claude Lafontaine and Bruny had a good job but Tom Hawley and Dreamer handled on two. Judges noted a wind shift which allowed dogs over-running the short bird to get a wind save. This and a general dissatisfaction with the test led to the announcement that the test was scrapped at 8:35. Handlers breathed a sigh of relief and all headed to the breakfast wagon compliments of Purina. Meanwhile the judges went to another nearby field to set up another land quad. 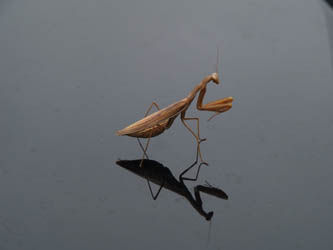 While Judges designed the land quad, a mantis landed on a handler's truck.
Were the prayers for the handlers or the judges ??
This quad had some similar principles but was bigger and more widespread. It faced north in a mixed hay field with many large round bales. On the far right at 239 yards gunners threw a duck to the right to a point of goldenrod cover. A few bales were en route. Next the middle right gunners at 113 yards threw at duck angled back to the left. They retired when the dog was sent for the go-bird. The third bird was middle left at 214 yards and also thrown slightly back left. They also retired. Finally the go bird on the left at 109 yards was thrown squarely to the left. All birds were ducks. 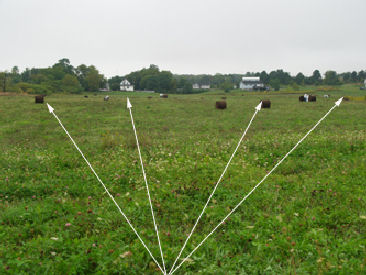 Test 6 - Land Quad with two retired gun marks.
Test dogs ran at 10:15. The wind was southerly or south westerly and the test dogs winded the short retired on the right. However by the time contestants ran, the wind seemed to be south easterly or easterly and dogs to the left of this difficult bird got scent. It soon became apparent that the all birds could cause problems. Dogs hunted wrong side of the long right bird, over-ran the short retired and went both sides of the long retired. A few dogs had loose hunts on the last bird down. Casualties began to mount. About 3:30 the wind shifted to the north east, making the short retired easier but causing many problems on the two left birds. When the test ended at 4:30 there had been 4 double handles, 8 single handles and 3 pickups plus some very loose hunts. Workers scrambled to clean up in anticipation of Workers Party tonight in Brighton. Callbacks came about pm showing dogs back to the 7th series scheduled to be a water triple. Dogs dropped for the  6th were 2, 3, 5, 16, 20, 24, 27, 37, 42, 51, 58, 61, 67. Dog 39 will start the 7th.