We stayed abed a little later than usual this morning having lost our dog in Test 4. yesterday. The temperature was only 2 C at 6:30 AM and the windshield needed scrapping!

Everyone had appetizers, drinks and a fine meal compliments of the Ontario pros….thanks guys. Our featured major sponsor today is Purina and the participants, judges, workers and gallery all enjoyed breakfast hosted by Purina at the trial site.

The test site was only one hundred yards from the site of yesterday’s Test 5. The test was a land blind with a shot poisoned bird on the left and a hanging poisoned bird on the right. Again, the line to the blind was through a small pond which was about 50 yards from the running line. The blind was 272 yards long; it was 135 yards to the poisoned bird gunner and 200 yards to the hanging bird. The hanging bird was 40 yards from the straight line to the blind. The wind, from the west, blew the scent of the hanging bird across the line to the blind. The test faced to the south.
Test dogs, Sassy with Pierre Mathieu and Cash with Jim Ling, ran the blind at 7:50 AM. The judges Jim Swanson, Al Arnold and Ernie Rose, instructed the marshall, John Sellick, to call dog # 6, RPM Hard As A Rock, to the line at 8:15 AM. The sixth series was underway!

The blind proved to be a good test of handling ability; all dogs avoided the thrown poisoned bird but several got to the tree where the bird was hanging. The last dog ran at 10:40 AM. There were no pickups.

We had a short move to a cat-tail lined pond , the site of Test 7. The club was well organized and the set-up crew was again ready and waiting for us with roads and paths cut, gallery areas established and all necessary equipment in place. Jane Thompson diligently searched for gunners, selecting only the best men and women for the task.

Our test dogs were again Cash (Jim Ling) and Sassy (this time handled by Joe Renouf since Pierre was gunning). The test dogs started at 12:15 PM and both did the test well. The first working dog, # 19 FTCH AFTCH Buckshot’s Rock Your World, came to the line at 12:45 PM. The test seemed to average about nine minutes per dog.

The test was an in-line water triple, with all three birds up the right side of the pond with all of the birds thrown left. The long gun, thrown first, was 245 yards from the line; the middle, second bird was 150 yards and the go bird was 100 yards. The first and second guns retired after throwing. Dogs were required to honour after running the test. The wind blew lightly from the right, and across the pond. Skies were clear and the temperature had risen to 18 C.

Generally, work on this test was good; there were three handles, dogs # 9, 43 and 55. There were three pick ups, dogs # 4, 11 and 56. Dog # 10 broke on honour after hammering the marks. The last dog ran at 6:00 PM and the testing for the day was completed. Call backs will be posted this evening at the “Maritime Night” dinner sponsored by Eukanuba. 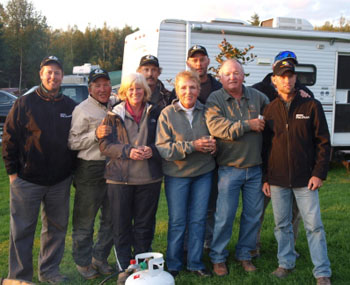 The Ontario Pros - hosts of the "Maritime Night" dinner