Update and callbacks of the Fifth Series Water Land Triple with Honor.
Of the last four dogs,  to run the water triple, only one handled.  Number 46, handled  by Bill Sargenti, probably had the best job of the series.  Callbacks were quickly announced, by Public Address Announcer Dean Ellis.   Of the dogs starting the fifth series twenty nine had handled before the start of the series.   Twelve of the fifteen dogs dropped had handled in a previous series.  Seventeen of the remaining dogs called back for the sixth series have handled.  The middle bird, in the fifth series water triple, was the nastiest one.  It was thrown very tight against the back of the flyer guns.  The right hand retired gun, also caused problems but was thrown to a spot dogs would often go to without a mark on the bird.  The cross wind caused several dogs to accidentally stumble on both birds.  With a straight down wind, casualties would have, probably, been much higher.  Several big hunts were needed to recover the flyer, where dogs tended to cross the pond, at the narrowest point, rather than the correct line.  This set up cheating on the two right hand birds.
Dogs dropped were 4, 12, 14, 21, 36, 41, 48, 50, 51, 53, 58, 59, 76, 79 and 81, a total of 15 dogs.  47 Dogs were called back for the Sixth Series Land Quadruple.

Sixth Series Land Quadruple with Honor
The caravan moved a short distance and parked  in a barnyard on the Boatright Ranch.  Test Six is a Land Quadruple, with honor, run from the top of an "L" shaped, 30 yard high dike, with a15 yard wide ditch at the bottom directly in front of the line, which was the bottom of the "L".  The left side of the "L", at the same elevation, was an elevated road along the bank of a  side hill.  Gun one, on the far left,  at 180 yards, threw a dead hen pheasant, to the right, from the left side of the road down the hill, and slightly toward the line, into heavy cheat grass.  The left middle gun, at 184 yards,  threw a dead cock  pheasant square to the right. The gunners retired into a green, brush camouflaged blind.  Deep and to the far right, at 225 yards, the third bird, a shot hen pheasant, was thrown, to the left,  from a live gun station,  into open to sparse cover.  The last bird down, at 76 yards, across a second ditch was a  hen duck thrown straight back.  This station was way in and to the left of the flyer guns.  A huge 20 yard diameter fig tree was to the gunners left and they retired immediately behind it.  The wind started from left to right and by the fifth or sixth dog had changed from right to left or in toward the line from the right.  The field was weeds and cheat grass randomly mowed leaving cover from 1 to 3 feet high.

The first test dog, Jewell Easter and Thunder, came to the line at 8:37 A.M. and took eight and one half minutes to turn in a good job. Alice and Sniper followed with a better job, that took six and one half minutes.  The first running dog, number 1,  was off the line at about 9:00 A.M.  Of the first fifteen dogs about half had done it without a handle and two had picked up. Dog, number 17, stumbled onto a dead cock pheasant on his way to the second bird thrown and was given a re run.  It was taking about ten minutes per dog and they could finish today.

The left hand bird thrown down the hill created most of the problem for the early dogs.  They wanted to hunt on top of the hill near the gunners.  It was difficult for them to get down the hill, across the road and into heavy cheat grass to retrieve the bird, once they had crossed the fall area going up the hill.  The judges asked handlers who had dogs with extra long hunts to handle their dogs.

The wind started blowing, from right to left, about the time of the first gun change and the dogs began winding the left hand bird, going up the hill.  A total of seven dogs were handled and three picked up on the test.   There were long hunts on both sides of the flyer gun and behind the left middle bird, as well as hunts on the hill on the left bird.  The fig tree tended to divide the test into two doubles.  The test would probably have been much harder if the tree wasn't there.   The judges were not happy with the wind change but they got a lot more out of the middle left bird after the change because of the wind pushing the dogs left behind the retired gun and deep.   Dog number 46 was the only dog to take the flyer first and short gun last and had her second bang up job in a row.  Dog 56 also had little trouble on the test. 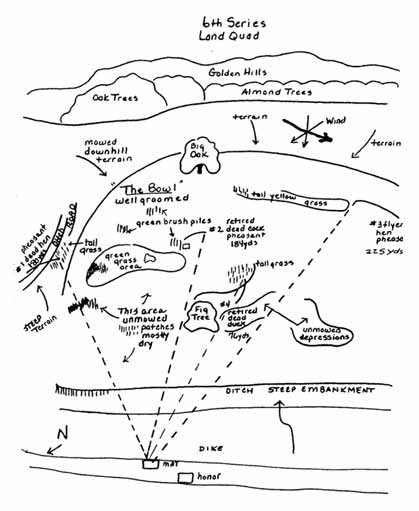