Although snow had been forecast for last night, thankfully it did not materialize and Thursday began cold, very windy and cloudy. The fifth had been left standing over night and after a few repairs to the tents that had been blown loose, it was ready to go by 6:45 am. A lone test dog demonstrated the series was much the same as the day before less the steady rain.

The first running dog, # 43 appeared on line at 7:11 am. Early dogs were subjected to a number of no birds and a few other snafu's. One bird was not dead and escaped while there was an extra bird in the field for another. That prompted 2 reruns to be run at the end of the series. Two more followed later.

A heavy wind now blowing from right to left across the test changed some of the scenting conditions and dogs going wide of one mark could sometimes win another or the drag back scent to it, Several tried to switch and required handling. One or so did switch and were picked up .Others seemed dazzled by two shot birds in succession. and hunted the last one down (left duck) in an area between it and the long retired mark, Some recovered but a few did not. Those that did recover from a handle often had difficulty with another mark.

The right flyer could also be a problem. Hen pheasants are always difficult to scent, but widely varied falls caught dogs out of the area of their fall and they would hunt wide and loose in a recovery effort. One or two tried to return to the short right , middle mark. When sent for the short retired mark, several blew through it and hunted toward the right flyer. In all, there were about 23 handles (34%), some that resulted in a pick up or double handle. The fifth was a challenging and potentially lethal series.

The Sixth series land blind was quickly readied. The line was on the edge of the dike and faced the same field as before. To recover the bird, dogs had to angle down the dike and pass between the right middle gun station and skim the bird crate from the right flyer. The then had to drive deep into the field to the right of the long retired bird station. The blind was marked by a small bush in the field about 400 yards from line. A stiff wind blew from right to left and the sun was setting in the distance. The handler was illuminated, but the dog was not.

Handlers were told their dogs were not to go into the brush on the right at the bottom of the dike. 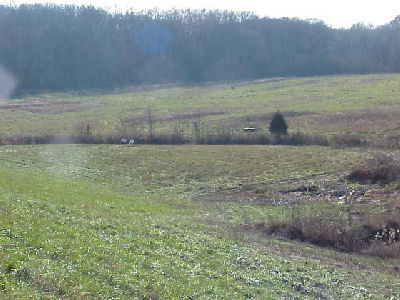 Test 6, Land Blind (Gunners in photo illustrate placement from previous
test, they are NOT in the test as run). Blind planter is shown deep
in the field between gunners and bird crate.
At 2:38 the test teams were called upon to demonstrate the test. Both had several corrections to pilot them around the pitfalls. At 2:59 pm the first competing dog, #22 stepped to line. The test took about 2-3 Minutes per dog and was expected to finish today. After several dogs had run and could not appear to see and/or hear handlers at the end, Judges decided to scrap the test. There will be a test dog at 6:30 am on Friday. Water marks will be followed by a land blind. Dog 54 will start.