Test 6- In line land quad with two retired guns and an honor
It was warm, in the low 60's, partly cloudy with intermittent wind as dawn broke. Although it had rained overnight, the clouds were breaking up, promising a clear day later.. The route from HQ was well signed and took us past the previous area to the Flying I ranch in Dobbin. There a land quad with an honor was forming in a pasture that faced east. By 7 a.m. final adjustments were made and it was an line quad with two retired guns .

The land was rolling, covered with 6-10' pasture grass with patches of higher grass. Nearly straight away from line, about 400 yards out, two guns shot twice and threw a dead rooster to the right. Closer and toward their left, a second set threw a dear hen angled back to the left. It fell  in front of a tree in a sparsely wooded patch about 185 yards from line. A third pair was also to their right and closer to the line. They threw a dead duck back to the left. It also fell at the base of a tree 135 yards out. The last group was to their left, bat deeper from the line. They shot a flying hen ridden out to the right. It converged with the previous mark and fell in higher grass 135 yards from line. The order was: far right, left middle duck, right middle pheasant, left flyer As the dog was sent for the flyer, the right middle and far right gunners retired. The honor was to the right of the running dog. At 7:25, the first test dog, Chica appeared on line. and produced a good job. The second one followed and hunted on some of the birds. It took about 8 mpd.

At 8 a.m. the first running dog, #49 stepped to line.. A bright back light from the rising sun made the long birds difficult to see.
Although the first few dogs did the test, some with wide hunts, the "wheels" soon became to come off.  Some could not locate the well ridden out flyers and threatened to switch to the adjoining mark. They required handling. Others became confused when sent fot the right middlre bird and drove deep behind the guns in "no man's land". Some recovered, a few retrieved the long right bird and others hunted wide and loose. a few of those were handled, too. Some could or would not handle and, sadly, were picked up. Of the first 17 dogs, 9 handled and/ or picked up on the sixth . It was brutally effective.

The 50% rate continued throughout the balance ot the series, even when the ligh shone on the birds and gunners in the afternoon. The last dog, #48 was excused from the honor at 3:02 p.m. Callbacks came as contestants were sent back to the previous site. A water blind was on deck for the seventh series.. 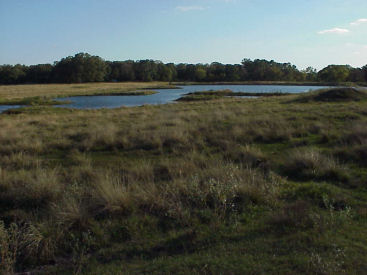 Seventh Series- Water Blind
The blind was ready to go when contestants arrived. The line was on a mound facing a field that rolled down to a large pond It had two peninsulas protruding from the right a fairly short swim from the near shore. The line went over the first and by the second, then continued into the wateer to a point on the left. The dog had to just touch that point, return into the water and swim to the far dike. The bird was located atop that dike positioned between the left side of the cattails and left the corner of the pond. It was about 185 yards from line T.he wind blew angled back from right to left..

The test dogs started on line at 4:04 p.m., followed  by the first running dog, #65 at 4:25 p.m. It took about 10 mpd and a "Mule" was dispatched to pick up dog and handler after completion to deliver them back to the site saving  time

As usual, it was somewhat difficult to keep dogs on line getting on, off and by the points.  It could not be completed by dusk and was suspended  at 5;25p.m. until tomorrow. It ended with dog 2 - dog 4 will start tomorrow at 7.a.m.