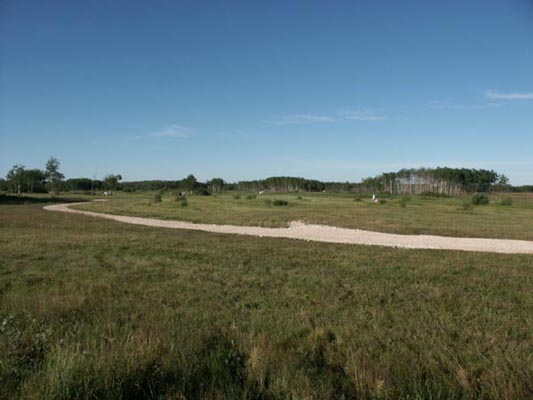 The first few early dogs had difficulty with the retired gun as there was very little breeze. The wind picked up and many then got wind saves on the retired bird. There were a variety of ways in the order that the handlers attempted to pick up the quad. Many who tried for the retired second ended up getting the long visible coat bird. Some then had to handle and others recovered fine. There were 15 dogs handled, the test concluded at 1:30 pm. The marshal provided the callbacks and announced that a double land blind would be run in the immediate vicinity. Those dogs dropped were: 5,8,23,27,30,40,42,and 52. Dog #1 would be the first dog to run the next series.

Test #6 - Double Land Blind
The first test dog, female Duk-Dawg’s Hanna Joy MH QFTR handled by Stan Hughes came to the line at 2:40 pm. Hanna did a very good job on both blinds. Male test dog was Bluenorth’s Alces Americana handled by Ed Zeerip. The judges decided to add a poison bird which was between the blinds and thrown from right to left. Moose did a good job on both blinds and the judges decided to remove the poison bird. There were 2 running mats. The short blind at 125 yards was run off the left mat, off a mound and through a natural funnel to the bird. Most dogs either lined this blind or had very few whistles. The handlers then moved about 3 yards to their right to receive their dog and commence the longer blind which was 250 yards long. There was cover to the right and on the initial line which could push the dogs off line to the right. There was a significant dip about 60% of the way out where the dogs disappeared briefly from sight. They then had to angle across a bend in the road about ¾ of the way to the blind.

By mid afternoon the temperature rose to 27 C. The wind did not change to impact on these blinds. This test concluded at 5:15 pm.

The Marshal gave the callbacks, the following dogs were dropped.