The caravan left Headquarters on schedule at 7am and proceeded to the test site. The Judges and the FT Committee had everything set and ready to go upon the caravan’s arrival. The sky was overcast with sunny breaks and 16 degree’s that remained the case throughout the day. Winds started out at about 5km per hour out of the east switching to the SE by mi d-day and then NW by late afternoon.

The test site was a large gently rolling hay field, with a few scattered hay bales and the field was ringed by trees and varying degrees of cover.

Bird #1 – A long retired gun was situated in the far left hand corner (SE) of the field. A drake mallard was thrown to the RT. landing at the edge of the cover with cut brush surrounding it. Distance 252 yds.

Bird # 2 – A stand out gun was situated in the SW corner of the field. A hen mallard was thrown to the RT towards the tree line and landing in the cut field. Distance 240yds.

Bird # 3 - It was a stand out center bird with the gunner sitting in front of the cover and throwing a cock pheasant to the LT into the cover. Distance 176 yards.

The Blind – It was 240yds long; it went across the cut field and planted about 30 feet into light cover. It was situated about 75yds to the right of the center bird and about 60 yd’s deeper. A hen pheasant was used. There was a medium sized pine tree at about 125yd’s and about 30 feet to the right of the line to the blind just before the cover began. The tree and the cover provided a challenge end for some dogs. 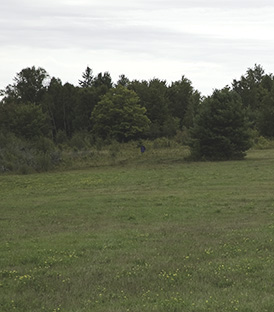 Close-up of blind
Handlers were called to view the test at 7:45am. The Official test dogs are: Basil Eden Wild Mena – BLF, Owned & handled by Val Chappell and Goldenbriar’s Wailin Willie – Owned by Connie & Richard Dresser, handled by Connie Dresser.They both did good job on both the marks and the blind and the test took about 4-5 minutes a dog.The first running dog, , Dog # 40, was called to line at 8:17 am.

We once again thank our sponsors Purina, Eukanuba, Tri-tronics and Winchester for their help and support during the day.