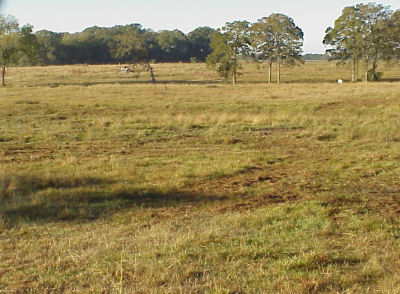 Tests 1 and 2 Land Double and Blind
A clear dawn broke over Montgomery for the first day of the stake. A pink sunrise with stars above were welcomed by all. Temperatures were in the low fifties with little wind.   The site was a fifteen minute drive west of town with a well signed route.
Low fog hovered over the area as the test, a double with a blind was formed. As the sun rose, the fog quickly dissipated, revealing a rolling grassy pasture with uneven terrain. There were patches of meadow grass of different hights.The land rolled gently down to a "draw" that ran horizontally  half way through the test. The line was located on about a 4' high mound facing it.

To the right, on the near side of the draw, a set of guns was positioned net to a tree with a patch of brush behind it . They threw a dead cock pheasant to the left. It landed in the grassy cover in front of and between a set of twin trees about 120 yards from line.

Deep to the left, across the draw a set of live gunners shot a cock pheasant ridden out well to the left. It fell about 180 yards from line in mixed grass. The blind was located between the marks, but on a tighter line to the right fall and deeper  than the marks. It was a cock pheasant marked by a small bush about 215 yards from line. The order was right, left, blind. Since the blind was planted after the last mark was recovered, handlers received their dogs behind a blind alongside the judges tent.

The first test dog was called to line at 7:28 a.m. It was Kazam's Eager To Go Chica, LF, handled by Jon Monroe. As they and each succeeding team came to line, announcer Gay Houser gave their names and titles.  The second test team arrived at 7:35 and also turned in a good job.( Dog # 27 was ill and scratched.)

There was nearly no wind at the beginning, but within a hour it rose noticeably. It angled nearly into the line, switching from left to right. The light was good and the roosters exciting. The test appeared to be a nice opening series, Do-able, but with enough terrain and "decisions" to challenge both dog and handler.  Early, most completed with just a "bump" or two. By noon, NFC's Patton, Max and Sam and NAFC Rose had run, turning in good jobs. New NFTCH Gunnie had also completed by then.

It became quite warm in the afternoon with temperatures in the mid 80's. Water was kept in the holding blind nearest the line and a canopy installed over it to cool the waiting teams.

Building scent, changing light and deepening shadows made the marks a bit harder to see at times. Starting in mid afternoon, a spate of no- birds and a few very long hunts slowed the stake. By 4:45 there were 11 dogs left to run with at least 3 or 4 or them being reruns. After #29 ran, the judges suspended the test for the day.

The test will resume on Monday with a rerun, #20. All others will be run in numerical order wether a rerun or not. No particl callbacks were given. A single test dog will be run at 7:15 a.m.. Monday. The following test was rumored to be a water blind .
Dog 58 would be first to run.