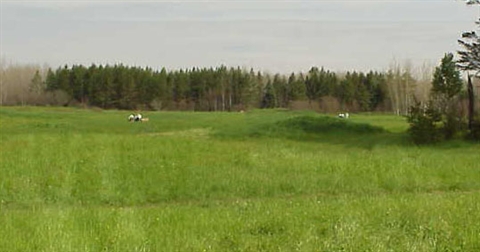 Test 1- Land Double
Sunday morning arrived mostly cloudy and calm with temperatures in the low 40's. It was about a half an hour drive from HQ to the grounds. The caravan left the Elementary school gathering place promptly at 6:45 a.m. It took only a few minutes for them to arrive at the site - the horse pasture at the Minnesota Iron Range Club grounds.

The test was nearly ready as the vehicles were parked. It was a straight up double (no retired guns) in a rolling, grassy field with a flooded area or two, compliments of recent deluges which had swept the area. The first set of guns was located deep to the right. They shot twice and threw a dead rooster pheasant flat to the right where it landed in medium high pasture grass 240 yards from line. The second set, a live flyer station was located closer in toward the line and shot a flying rooster ridden out to the left.  It fell in the same type of cover about 150 yards out. There was no wind early (but lots of bugs).

Later, the sun arrived bringing a switching wind and hoards of icky tent caterpillars (army worms) that decorated jeans, chairs, trees and anything else in their path.

The test dogs ran promptly at 7:30 and both did well on the picturesque and do-able series. After, Dean Ellis invited Sherwin Scott and "Maxx" (who had been scratched earlier) to the line. Dean then summarized Maxx's amazing career as a competitor and producer. It was an emotional tribute the pair. After, Maxx was showcased as he ran honorary first dog. Shortly after 8 a.m., dog one appeared on line. It took 4-5 minutes per dog to complete.

The line was located on a small knoll facing two small berm type hills a short distance away. The path to the flier was down, then up and over  the left hill. Beyond was a small body of water, then another gentle gentle slope where the bird lay on the flat . Dogs would lose sight of the mark while handling the terrain. Some also appeared to square the water a bit. Once in the area, most had to "shop" for the flier. Later dogs had paths and growing scent to contend with, but most recovered it in a workman like manner.

The "line" to the right, dead mark was through a slot formed by the tip of a hill on the left and a stand of trees on the right. A number of dogs appeared to avoid the slot and crossed the hill instead. (The gunners were semi retired as they sat down once their bird was thrown, so dogs were unable to see them when first sent.) Since the bird was in line with the right side of the slot, some that crossed the hill appeared to be confused and hunted between the guns or short of them. Later dogs had path to guide them to the fall area once past the hill. While there were a number of hunts and "dings", there were very few who failed to complete.

By about 2 p.m., an announcement was made that no other test would be run today. The series ended about 4:30 with the test dogs scheduled to run at 7:30 a.m. on Monday. Test two was rumored to be combination Water/Land blind starting with dog 27. Call backs were given on site and only 3 dogs had been lost. They were numbers 1, 18 and 39. 102 remained for the second.