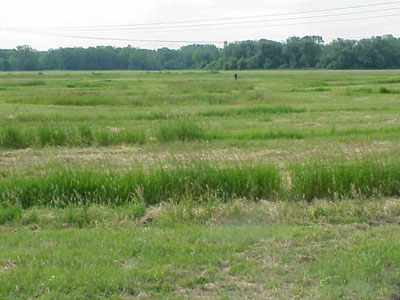 Test 2  (?)  Blind - Planter Standing at bush
Sunday arrived sunny warm and breezy with temps in the 60's and a noticeable humidity. Both caravans left on time taking about 1/2 hour to arrive at the test site. By 7 a.m. gunners were in the field and birds were bring shot to supply the first running dogs.

The line was set atop a 4-5 ' mound and faces an area of grass strips. The uncut areas were nearly 4' high in spots.  The test was a land double followed by a land blind about 90 degrees to the right of the flyer mark.

Judges tweaked the test a bit but by 7:40, the test dogs were called upon to demonstrated combined series.  The first team did well on both, but the second team had a great deal of difficulty on the blind. After, early handlers were allowed to view the line for several minutes. At 8:10 the first competing dog, #82 appeared on line.

The two marks were bout 60 degrees apart. To the left, a dead hen pheasant was thrown flat to the right. It landed in the tip of a heavy strip of cover (The same on that the gunners stood behind) about 135 yards from line. Deeper and to the right, a flying hen was shot to the right. The falls were varied as some of the birds wanted to go straight up, while others were well ridden out.  It landed about 190 yards away. Both marks were nearly down wind.

Varied falls on the flyer caused some hunts but most were successful. A few had  long hunts, however and a few handled on it . The line to the left mark went through two strips of cover, the first of which had some unseen standing water in it. Since the cover was relatively high, dogs lost their mark going through it.  Dogs would get to the area and hunt the open space around the strip of cover or drive through the area to the tree line behind. Several had to be handled after going out of sight for significant periods.

Once the marks were recovered, a blind was run from the same line. The line to it was 90 degrees to the right. It was a dead hen pheasant marked by a small bush about 135 yards out. It was also a crosswind blind. Dogs seemed to favor the the left once leaving the mound . Since the wind blew from right to left, a cast to the right was also into the wind. A number had multiple cast refusals. After the first strip of cover, a heavier one, surrounded by thicker cover  and backed by a piece of running water also pushed dogs left. Until about noon, there was quite a bit of trouble on the relatively short blind.

About 12:30 a moderate, persistant rain began and visibility became poor. Also dog 13 scratched due to an injury. Later dog 31 also scratched. Dog 10 was skipped over without an explanation.

The rain stopped by mid afternoon; the sun returned and it became hot and humid with temps in the low 80's. The wind switched and the left bird appeared to be more "do-able". The blind was then nearly into the wind and some dogs seemed to have trouble hearing some whistles (maybe). After 64 dogs had run, 7 had handled and 3 picked up on the marks.