Well we have finally made it to the last day of the National. As usual tension always mounts on this day. Nature has provided us with a wonderful sunny day, cool but nice. The winds are out of the NW at 5 – 10 km/per hr. and switched to the west shortly after the blind began. There are 15 dogs back to the 9 th series water blind.
Test 9 - Water Blind with Poison Bird
The pond for the 9th & 10th series is huge & spectacular with many islands and points. The water blind was run from the north corner to mid way down the pond on the south side. The line was about 30 yd’s back from the water. The poison bird gunner was situated on the roadway of the dike throwing towards the north corner of the pond landing about 20 feet from the line of the blind where the dog needed to enter the water. The line to the blind was an angle across the dike to the corner of the pond past the poison bird, then angling across a narrow channel over a poit and re-entering for a big swim angled across the pond by an island on the right and then between an island on the left and a point on the right back to the bird on the far shore. The bird was a drake mallard and it was up on land about 20 feet from the shore line. The length of the blind 237 yds. 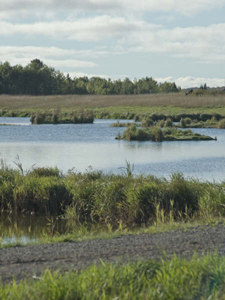 Test 9 - Water Blind
The Official Test Dogs began at 8:30am and both dogs did a good job on the blind once they picked up the poison bird. The first running dog, dog # 7 started at 9: 07 and the test was completed by 11: 10.

Most dogs did similar work and the poison bird did not present a problem. There was only one dog dropped dog # 35.

The finalist for the tenth series were then announced:

Dog # 69 – FTCH R.P.M. Anvil, owned by Richard & Beverly Davis, handled by Charles Dygos.
Test 10 - Water Quad with Two Retired Guns
Well it’s the moment we have been waiting for all week. The final test! There were 14 finalists, of these great dogs 5 dogs entered this test without a handle the rest had all handled in previous tests. Grace Burmaster did a wonderful job of announcing each competitor as they came to line.

Before I discuss the 10 th series I must commend the Marshalling team headed by Richard Dresser, the equipment team headed by Don Dupuis, Rob & Nancy Fraser, the Gun Captains and their fill in after Thursday Jane Thompson, Howard Simson the Game Steward and Art Roy for Traffic for being the best mechanical team I have ever seen. Reg Tivi for arranging/ seeking out and grooming the grounds we used. Sensational!! There couldn’t be a National without people from all parts of the country stepping up & willing to give 10 days + of there time to help the host club.

Once again I/we can’t thank our Major Sponsors Purina, Eukanuba, Tritronic’s and Winchester. Without there support clubs could not begin to think of hosting these trials and thank you to all the local companies that put the icing on the cake.

This was run on the same great pond as the 9 th series.The test was south facing with winds at about 20km/per hour from the west. The line was set about 25-30 yards back from the pond.

Test 10 - Right Marks
Bird # 1 – Situated in the LT. part of the pond at 369 yds, a drake mallard was thrown to he rt. and he gunners traveled to a natural blind set 150 ft. over from there throwing position. The line to the mark was an angle entry into he pond, over or skimming by the Lt. close island, down a channel between a point and an island up on shore back 100 yds to a drake mallard thrown behind brush.

Bird # 2: Center RT. retired gun situated on the crest of a hill on the south shore of the pond about 70 yards from the water. This was a drake mallard. Thrown from Rt. to Lt. into light cover. Distance of this mark was 224 yds. The dog needed to enter the water swim about 50 yards, go over a point and into the big water to the far shore.

Bird # 3 – Stand out bird at about 146 yds. The line was similar to the long LT center bird. A drake mallard was thrown from the end of a point landing on a island with medium cover at a distance of 146 yds.

A variety of work was seen but the far Lt retired proved to be the most difficult.

The Official Test dos started at 12:16 and both had to be handled.

The first running dog, Dog # 19 started at 1:15. and the test finished at about 6:30 with everyone returning to headquarters for the Purina Party to toast the Finalist and Winner.