The entourage moved back to the LeGrande ranch for the ninth series, a water triple with a retired boat bird. 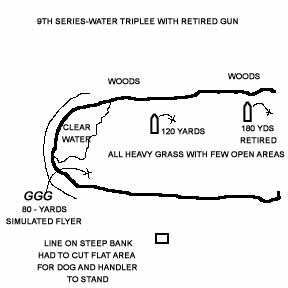 The triple was in  the grassy pond were the fourth series water blind was held. The line was set on the side of a steep hill (So steep that a "shelf " had been shoveled out for the line.) The farthest bird (ret.) was approx. 180 yards, the other only about 85 yds. All were dead ducks thrown angled back to the right. The simulated flyer guns stood on the road at the bottom of the hill, while the other two were in boats. The farthest boat retired as the dog recovered the first bird.

By mid afternoon the tension was building and  there was speculation about a winner within the remaining 15 contenders . The entourage moved again within the ranch for the tenth, a land triple with two flyers and a retired gun.

The two shot flyers were ducks while the retired bird was a dead pheasant. The left mark was approx. 175 yds, the center  200 yds and the right one 180 yards. As each dog arrived on line, Dean Ellis announced their names, titles and owner(s)/ handler.

The excitement of two shot flyers along with the difficulty of winding a dead pheasant after, caused a bit of "shopping", but it is reported that only one dog handled on the series.  Ann Rauff had a flyer which was not dead and flew away with "Pricey " in hot pursuit. Judges called a no-bird, but Pricey would not abandon her pursuit and eventually returned proudly with her prize! (She was given a rerun and ran last)

The final series ended by early evening and the winner NAFC-FC-CNAFC EBONSTAR LEAN MAC was congratulated by all.  Soon after, Sherwin announced a victory party at a local establishment and the crowd slowly dispersed. Once again, the best of the best had emerged from the grueling Stake