Dog 45 ran about 7:15 and was called back to the ninth making a total field of 20. The ninth was partially set up when the judges arrived although a good bit of time was taken to position the gunners who had also been at the old site.

The test was a land quad with two shot flyers and two retired guns. The line rested on the same spot as test 7, however it was organized on the left side of the valley instead of the right.
To the far left a set of live guns were positioned in the meadow grass and shot a flying rooster well ridden out to the right. It fell just into a patch of sagebrush about 245 yards from line. To the right, deeper and up a hill, a second set stood next to a juniper. The shot and threw a dead duck down a patchy sagebrush hill to the left. It landed in the sage about 305 yards out. Then, to the deep right and higher on the hill, a third group shot a flying mallard up hill, across a taller patch of sage, angled back to the right. It fell in mixed sage nearly 260 yards away. Lastly, a pair of guns stood in closer and to the right. They were located to the left of a washed out creek bank, They threw a dead duck to the left where it splashed into the widening of a stream 145 yards. from line.

The order was:Left middle, right, right middle flyer, left rooster flyer. As the dog was sent for the first bird, the left middle and right (dead bird) guns retired. It took about 10 mpd to complete.

The test dogs demonstrated the difficulty of the series beginning at 8:45 am. as both handled on the right middle flyer.

Angles through the sage brush and left hand pond, combined with retired marks,converging lines between both flyers and dead birds made this test extremely challenging. Three of the first 6 running dogs handled and there were some wide, loose hunts.

Test dogs arrived about about 2:50 p.m. and both handled on one mark. The first running dog , #101 appeared on line at shortly after 3 p.m. The excitement of shot flyers, rolling terrain and middle dead mark challenged all dog's marking ability. Of the 14 finalists, 5 handled on the marks but none were picked up.The tenth series and 2007 National Amateur stake was completed at 5:43 p.m when dog 81 completed. 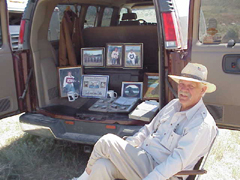