The day started rainy, cold and miserable with temps in the 50's and a moderate wind. It slowly cleared and became sunny by mid morning.
Test 9 -Water Triple 2 Retired Guns  ( More land in middle between water and land marks)
The ninth  was a water triple with two retired boat birds and a flying rooster on land to the left.The marks were spread in a 180 degree  configuration. The two boat marks were located  on the left end of a  flooded timber pond that had strips of saplings, dead trees, cattails and other weeds in the water. Each boat was moored on a strip and well camouflaged. The farthest one was deep and far to the right of the shot flyer mark.  There a gunner shot and threw a dead duck flat to the right. It landed in the flooded timber about 170 yards out. The second boat was in closer and to the right. That gunner shot and threw a dead duck at a sharp angle back to the left. It also fell in flooded timber about 140 yards away. Lastly, the flyer guns - far to the left on land and the shortest mark, shot a rooster well ridden out to the right. It landed in grassy cover about 60 yards from line. There was a strip of tall weeds and cattails at the water's edge (about 25 yards from line). Some cattails extended into the pond a good distance between the shore and left mark. Much of the water area was lunging depth.

The wide angle of  marks with a short flyer tempted dogs to swing off the water marks and onto the flyer station as the birds fell. Some only got a glimpse of the ducks as they were thrown. Early dogs seemed to either do it very well or fail. Of the first 6, 2 picked up.There were loose hunts in the water, some to the far shore or an island deep on the right. Others ran down the shore for the middle, far mark and were out of sight  for some time. A few tried to switch or were hopelessly lost and needed to be handled. Nearly all handlers took the outside birds first, then the long middle retired mark. The two retired  marks were nearly down wind. 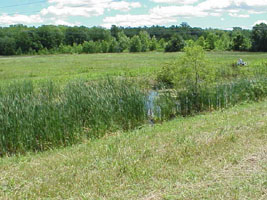 Participants were quickly moved to the Meadville Road area for a set of land marks. The test was ready upon arrival.  The Tenth was a land quad with three shot flyers and two retired guns  The line was located on top a dike over looking a huge grassy field that had randon mowing within. A short distance and parallel to the line was a cattail lined 12-15'  water filled canal. In the middle of the test a cattail lined ditch ran perpendicular to the water filled ditch. On either side stood a set of live bird gunners. The left shot a flyng rooster angled back to the righ 50 yds away: the right, a flying drake angled back to the left: 45 yds. out. Between them were two other sets. Deep to the right a set of gunners was located in the grassy cover. They shot and threw a dead hen pheasant  flat to the left. It fell in grassy cover  250+ yds.  from line. To the right and closer to line, a third set of flyer guns was stationed at the base of a power line tower. They shot a flying hen mallard to the right. It landed in the grass 170 yards away. The marks were arranged in a 180 degree spread. The order was: Long, left middle; left flyer; middle right flyer; far right flyer. As the dog was sent for the right bird, the two middle gunners retired.

The ditches, heavy cover, wind and configuration of the marks made the test difficult for dogs. Varied falls on the shot flyers plus nearly nothing to mark on for the long bird tested dogs to their limit. Unfortunately, one dog, #17, could not be handled to the long mark and had to be pcked up. In all 6 other had handled on the marks - 5 had not.

By 5 p.m. the test ended when #89 returned to line. A move was quickly made to the White property, site of the 5th series, for the awards. There Chairman Mark Rosenblum thanked all workers, sponsors and land owners before introducing the finalists.

Finally, the big moment arrived and dog # 56, FC AFC Chickamauga Choo Choo handled by Lynne DuBose  was announced as the 2004 National Amateur Champion. It was the second time she had won the National Amateur at Batavia. The first was in 1992 with NAFC Gusto's Last Contol. She has also won another in 1998 with NAFC FC Hattie McBunn (Nevada).  The latest accomplishment made her the only person who has won three National Amateurs with three different dogs!