And the winner is.....
Dog #5 - FTCH-AFTCH-FC L and L Black Tie Affair, LRM
owned and handled by Howard Simson - Congratulations!!!!

As it happens Howard was the successful bidder on his own dog in the calcutta, the bar at headquarters was opened at his request and Howard is also buying supper tonight, as he should, isn't that what winning is all about? Again, congratulations Howard!!!

It was a cool morning but it is forecast to reach 31*C. There are a few thin clouds in the sky and the wind is coming from the south southwest at about 10kmh with occasional gusts.

This test is utilizing the northeast corner of a very large, U-shaped, complex pond in a sandy piece of property. This area also is a worked-out and abandoned gravel pit but of larger proportion than the previous properties used. The test is heading in a northerly direction with the wind at their backs and slightly from the left. The sun is to the right and will move to the back as the day progresses. The dogs are starting from the top of a small bank and the water directly in front of the starting mat is deep but still walking water and drops off to swim water at about 20 yards. The horizon is a mass of trees and bush set back from the bank, the tops are visible. 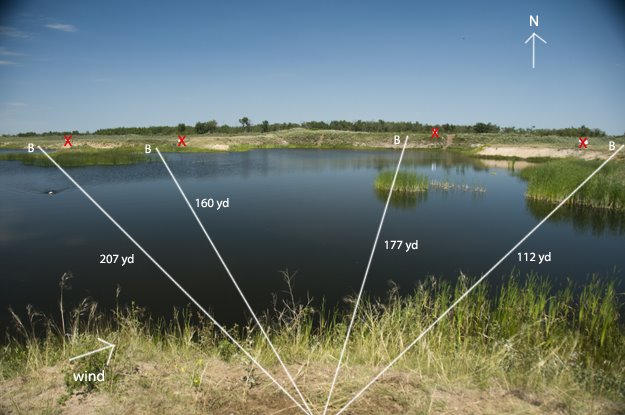 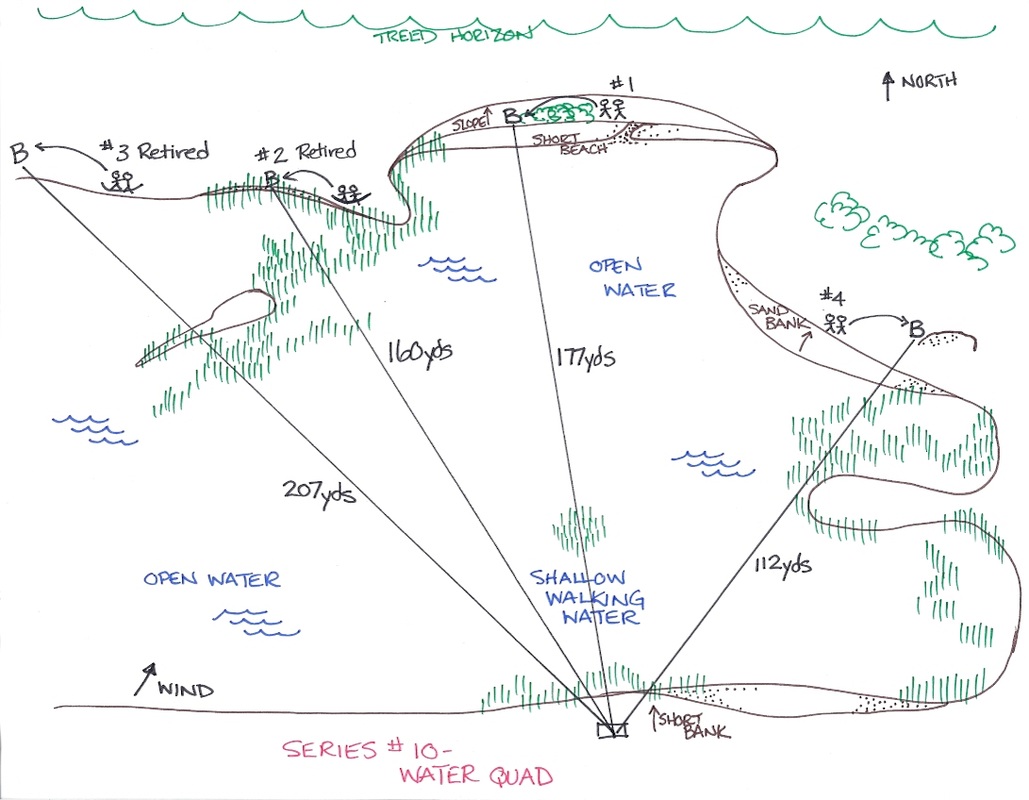 #1 the first bird is the mid-right station and is thrown right to left at 177 yards, the line is slightly left of a straight line from the mat. The dog should pass through a small patch of reeds at the edge of the walking water then swim through open water to the shore of a steep sandy bank with some thin vegetation. The duck lands on the top of the bank, at the end of a strip of thick, green cover. The gun remains visible and there is a very obvious path from the shore to the top bank to the right of the gun.

#2 is a retired gun that sits midway up a shallow bank with short cover. The duck is thrown right to left and lands on the sandy, reedy shore behind the reeds at 160 yards. The line to the bird should take the dog through the thin, north east edge of a reed bed in open water. There is a small island rising out of the reeds to the left. The water leading up to the shore is splash water. This is the mid-left station.

#3 this is the longest bird at 207 yards on the left side. The duck is thrown right to left and slightly back from the top of a short sandy bank that angles back to the left and lands on the shore in long cover. The line to the mark crosses a narrow, reed –covered point that extends south west from the island. A swim across a short stretch of open water brings the dog to the pick up.

#4 is the “go bird” on the far right side. The shortest bird at 112 yards is thrown left to right at the top of a sandy bank into thin cover on the bottom margin of a small mound. The line cuts the edge of a sand pile isolated in a bay surrounded by splash water. The dog should hit the shore and climb the moderately steep bank, crest the top and pick up the duck that lands about 15 yards in.

The final 10th series of the Canadian National Amateur Retriever Championships started at 9:35am with dog #8 TML’s Light the Lamp, owned and handled by Bill Kennedy.

By 1:30pm the 2009 Canadian National Amateur Retriever Championship was complete. The last dog has run, the judges are meeting over a well-deserved refreshment and the set-up crew is tearing it all down for the last time. How anti-climactic! As the test progressed the heat rose until it hit a blistering 31*C, the wind died down with only an occasional breeze from the west...oh to be the dog in the water!!!

As can be expected, with the caliber of dogs that entered this stake, all of the dogs have done a good job of this 10th series. The gallery was in excellent form, cheering each other on and lots of good-natured ribbing going on. Les and Tim from Purina have joined us for the last day. As the test is being torn down, handlers and their dogs are leaving the site and heading for headquarters, anxious to find out the winner.

Apologies for the delay but here are the finalists. Finishing a national event against the 'cream of the crop' is no small accomplishment and so a hearty CONRATULATIONS to all of the finalists. Many thanks to Ducks Unlimited Canada for providing the finalists gifts shown in the photo.

The finalists of the 2009 Canadian National Amateur Retriever Championship, in numerical order, are:

ALL THE THANKS IN THE WORLD TO THE JUDGES!!!
Dennis Voigt
Phil MacMillan
Ron Graham

THANK YOU TO ALL THE VOLUNTEERS!!!!

A BIG THANK YOU TO ALL OF OUR SPONSORS,
MOST ESPECIALLY:
PURINA - official dog food supplier and 'Platinum' sponsor
TRITRONICS - official e-collar supplier
DOGS AFIELD - official ammunition supplier
DUCKS UNLIMITED CANADA - sponsoring the finalists gifts
CAPITAL FORD - official vehicle supplier
A1 RENT-ALLS - supplier of 'other' equipment
POTASH CORP
SASKATCHEWAN ENGLISH SPRINGER SPANIEL CLUB
We thank all of our other sponsors as well
A full list can be found under " Event Information"