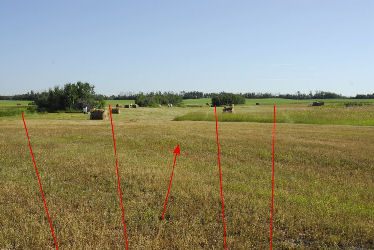 Two test dogs were run and both handled on the right centre retired mark. The first running dog (number 33) was called to line at 8:06. The test proved to be a challenge, with more handles than not. Dogs had the most trouble with the long right retired mark and a few had problems with the shorter right retired mark

. Depending on the order of pick-up, the dogs usually went either wide right or back to the long guns, when sent for the long retired mark

.Of the 16 dogs that ran, there were 8 handles, 1 double handle and a switch. The test concluded at 10:05 and the caravan moved back to the campground in the vicinity of the seventh series water blind to run a water quad.

Temperatures have climbed to the highest levels of the week, so water will be welcome

Finalists in the 2006 Canadian National Retriever Championship are:

4 of the finalists have not handled in the trial and starting dog for the tenth series will be number 45. 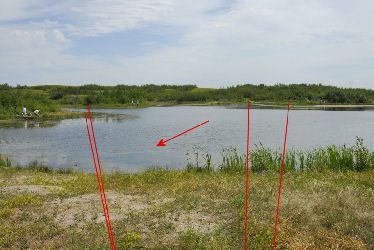 . Both test dogs handled on the long mark. The judges moved it in a bit to give better visibility. The first running dog was called to line at 1:05 PM.

The two visible guns were not causing any problems, but dogs were having trouble with both retired marks. The blind was definitely a factor on the long mark, as dogs were pulling to the left and needed handling out of the area. On the right mark, dogs could get lost deep and upwind. Quick handles avoided the dogs being out of sight.

This test proved to be a challenge. Only 3 dogs did it without handling. There were 4 handles and 3 double-handles.

It was picked up in various order after the go-bird on the left was retrieved. Some tried for the right retired second and one dog retrieved the long retired mark second. Most went after the visible coat second and then it was dealer’s choice as to which of the retired marks was picked up next. Because of the long swims, the dog had lots of time to think and some changed their minds en route.

The test concluded at 5:45.The competitors and workers headed back to headquarters to enjoy the Purina-sponsored finalist celebration.

Gord Benn thanked all the workers and the major sponsors: Purina, Eukanuba, Tri-Tronics, Ducks Unlimited, Cabela’s, Winchester Arms and Enterprise Car Rental. Also thanks to Home Hardware and Glenn Norton for his support.

Sherrill Elm introduced the finalists and we all raised our glasses of champagne to toast the 2006 National Field Trial Champion. Dog number 60, NFTCH FTCH Bigguns Big Chill owned by Murray and Dianna Murphy and handled by Charles Dygos. Congratulations to the winner and to the Wild Rose Retriever Club for hosting this National.