Competitors and workers arose to a superb fall day, partly cloudy and quite cool at 45 degrees. Easterly winds had a definite bite and fleece or down jackets were quickly unpacked. The first test site was about 9 km away and the caravan departed promptly shortly after seven. While judges and workers finalized the first test, announcer Lorene Wilson welcomed all. Today was 5 years after the tragic 911 events in that rocked the world. We all joined in a moment of silence in memory of the lost citizens and rescue workers. Trialers contemplated how lucky we are to be able to pursue our passions today.

The honorary test dog was 12 year old 2004 Canadian National Amateur Champion, FTCH AFTCH FC AFC Melmerby’s Maggie Mae, a YLF, owned and handled by Joe Renouf. Maggie was well on her way while the bird was at the top of the arc!

Soon judges called for test dogs to run a land triple facing north in a rolling cut hayfield. It offered scattered clumps of trees and cover patches. A steady easterly breeze crossed the test from right to left.

The right hand station at 174 yards threw a drake duck steeply back to the left along a bush edge and over a strategically fallen tree. The left hen duck, a fairly big swing, was thrown to the right at 166 yards in a patch of cover. The last bird down, a drake duck was in the middle, thrown left at 222 yards. About 50 yards to the right of the middle station was a group of “Bigfoot” Canada Goose decoys. There were two gunners at each station and none retired.

The first test dog was a Male Flatcoat, Hardscrabbles Kaotic Kosmos, owned and handled by Anne Steer from Maxville Ontario. They did a good job so judges changed the order to left, right and middle and retired the right gunners. The second test dog, Moira River Maddy, a BLF, owned and handled by Greg MacInnes of Belleville Ontario also turned in a nice job. Judges decided to not retire the right station and called the first dog, # 24 about 8:20.

The test appeared very doable for the dogs. Some excellent performances were turned in. Some dogs went to the wrong side of either the left or middle birds and hunted before recovering. Others went wide and deep of the left bird. However, most dogs that went wide of either the middle or right bird scented it and had a good mark. Until 11am the right gunners and bird were in shade. This bird was thrown steeply back almost behind the guns but since it was separate from the other marks and bounded by the forest edge, most dogs did well. The test finished at 3pm and callbacks came quickly-all dogs back!!

Before 4pm judges had set up and run the two test dogs on a single land blind. The line was moved 100 yards to the right. The blind was at 275 yards and located between the middle and right marks but just left of a large clump of trees. 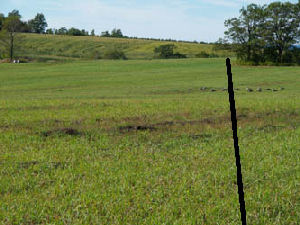 Test - Land Blind
The middle gunners from the first series sat in their chairs while the blind was run. In the valley and half way to the blind the Bigfoot goose decoys had been repositioned. The line was through the middle of them. These decoys were very visible to the handlers but not to the dogs until they had run about 50 yards. The first test dog, Kosmos, showed whistles might be needed early and casting required through the goose decoys. The second test dog, Maddy, however lined the blind. Dog # 38 started and had a good job. Once again there were many good jobs but some dogs really struggled getting through the decoys. A few went right of the clump of trees which was considerably off line. Only a couple of dogs lined the blind but quite a few had only one to two whistles. The test finished shortly after 7 pm. Callbacks arrived at headquarters and 2 dogs were lost, # 7 and 43. The scheduled starting test for tomorrow was a water blind at Gahonk and Nilak kennels.