The caravan left headquarters at 7am to proceed to the test grounds at the home of Reg Tivy. Upon arrival once again the judges were ready for us,thanks to the Marshalling crew headed by Chief Marshall Richard Dresser and his Assistant Jim Dorobek and Equipment Chairman Don Dupuis.

The weather today is overcast and cool 10 degrees. So far the rain gods have been good to us and hope that continues throughout the day. The wind is north but very gentle. We did end up having a light misty rain on and off.

The test grounds consisted of an L- shaped pond, with a point and a small island, a small swim by pond situated inside the L. The ponds are surrounded by small hills and mounds with scattered cover & small birch & pine trees. A dirt road ran parallel to the line about 20 feet out.

Bird #1 – Long centre mark 245yd’s with stand out gunners throwing a drake mallard angled back to the left. The line to the bird was across the road and into the pond for a short swim then up on land and back 175 yd's.

Bird # 2 – Left hand bird was a distance of 149yd’s and a drake mallard was thrown to the right landing on the slope of a hill in cover, These gunners retired behind a fir tree. The line to this bird was an angled line across the road into the pond, then continuing the angle over the point into the pond over the island to the shore & up the embankment to the bird.

Bird # 3 – The go bird was to the right side of the test and a hen mallard was thrown to the left from the base of a large mound to the top. The distance for this mark was 112yd’s. The line to this bird was again an angle across the road into the pond up trough some cover into the swim by pond and up to the top of the pond.

The Official test dogs began at 7:30 with GRM, This dog handled on both the Lt. Retired & the long center bird. The second test dog BLF did a great job. The first running dog # 54 started at 8am and the test seems to vary between 8-10 minutes in duration.

Special mention needs to be made to Howard Simson the Game Steward who carefully has hand dried each bird in all series to date. He obviously has developed a relationship with his charges and has promised them the best care possible.

This test was challenging with many dogs being drawn to the long standout gun when they were sent for the short retired and even occasionally when sent for the go bird. There were 15 dogs handled, 2 dogs were picked up and there were some switches. 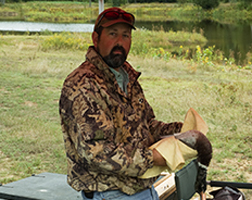