After a clear and gorgeous Sunday contestants, workers and gallery were met with wet roadways and a light ground fog.   The Third Series, a water triple with a middle short retired gun, had to wait for mother nature.   Alice Woodyard and AFC Duckpond's Sniper MH showed early contestant the test at 8:00 A.M.  The long bird was adjusted  after Alice ran.  She was followed by Jewell Easter and AFC Cucamonga's Thunderbolt at 8:20 A.M.  Both dogs did very well on the test.  The first running dog, dog number six, FC-AFC Greenwing No Moon handled by Ed Forry, did well.

The first bird down was a dead pheasant thrown to the left from the long right hand gun station.  The line to this bird, at 240 yards, was through the right edge of a small oblong pond.  The middle bird, a dead drake, at 180 yards, was thrown from an spit on the near side of the pond to the left toward high deep tules on the left bank, landing in the open water for most dogs.  This gun retired at their gun station.  The left bird, at 150 yards, was a shot drake duck flying from left to right.  The line to this bird was across a drainage stream running into the pond.  The gallery was located 200 feet above and behind the line with an outstanding view of the test and surrounding country side.

Most handlers felt the test was designed to minimize swimming time and yet have some meat in it.  The test  was just down the draw (swale) from the first and second series enabling the judges a short move if the first series was not completed the first day.  The test dogs took less than 6 minutes and averaged  around seven minutes.  It was possible to get all three birds, without getting wet, except for a few feet on the middle retired gun.  Generally the dogs went by water on the two right hand birds with seven of the dogs handling (about 17%, in the first 40 dogs).  Most of the handles were dogs that swam under the arc of the middle fall or behind the  gun station and eventually landed near the deep right hand fall.

The third series was not completed and callbacks will not be given until the completion of the test tomorrow. A storm front is moving in and rain might greet tomorrow's early handlers.  The consensus is that the first three series were not overly difficult, but the judges have been getting adequate separation, and time wise are ahead of the game. 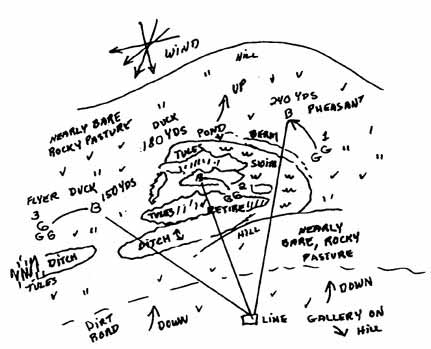