Monday began warmer than the day before , however many awoke about 5 am to the sound of a substantial shower out side. That tended to dampen early enthusiasm . By 6 am.the rain had ended, temps were in the 40's and attitudes improved.

The site for number two was down the road to the left of the previous one . The line was located on the middle step of a 3 step ascent from a road in front of it. The test was a land blind under the arc of a poison bird. To the near right, about 60 yards out, two gunners shot and threw a dead rooster to the left. It was a long throw with a high arc - quite exciting. About a dozen goose decoys were barely visible in a patch of sparse, higher cover just to the left of the gunners and closer to line. Handlers were told it was a walk up. Once the dog arrived on the mat, gunners would shoot and throw the poison bird. Handles were given a number before releasing the dog. After sending, the handler could move to the higher step behind to handle. The blind lay deep in the same field, across the lines to both birds of the double. It was marked with an orange stick and small dark bush about 280 yards from line, After the dog recovered the bird, the poison bird was picked up by the guns. 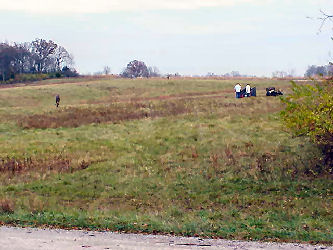 Test 2 - Land Blind
The test dogs arrived on line at 6:45 and both had only a few whistles to recover the bird. The announced male test dog had arrived to assume his duties today. It was Dick Dallesasse with AFC Sasseville Getum Quick, BLM and he would take over at this point. At 7 am, the first running dog #16 came to line. It took about 3 minutes to complete.

To recover the bird, dogs had to go down the step, across the road and under the arc of the poison bird. Beyond was the swale (where they could go nearly out of sight and possibly bolt to the poison bird), across both lines to the previous series marks and up the hill where the blind lay.

Most had two to four whistles to recover the bird, but some came perilously close to the poison bird or had poor initial lines. One or two lined it. The test completed at 10:30 am when dog # 15 returned to line.

A move then proceeded to lake 5 where a water blind was nearly ready Callbacks came as the caravan arrived and all were invited back for series 3, the water blind. 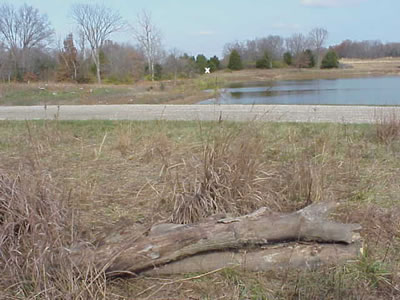 Test 3 - Water Blind
The line was behind a gravel road that it parallel. A large log was just in front of the line mat .Beyond lay the left, irregular shore of a medium sized pond. The retrieve the bird, dogs had to negotiate the log, go down the sloping shore into a small amount of water (running), past a number of standing goose decoys up on the left shore and over a small point. The line continued into another small bay containing about 1/2 dozen floating duck decoys near the shore (swim), across a pair of separated points and back into a large bay of swimming water. The blind, a rooster lay on the far shore tight to a wooded area. It was located between a tree with dead branches hanging from it and a small green bush about 200 yards from line

The first test dog, Exo and Tara came to line at 11:05 and had some difficulty at the end. After, judges added more "bushes" to the far point and let handlers view the renovated site. The second test dog, Dallesasse and Duke demonstrated it at 11:20 am. Satisfied, Judges called the first running dog to the holding blind. At 11:31, Dog 38 (sorry, wrong number given earlier) initiated the demanding series.

Some dogs were not anxious to enter the water even though the sun was shining and temperatures were about 60 degrees. The log threw some off line and an early correction was needed. Others were hesitant to leave the first point and either wanted to go fat or try to take the shore on the second point. The end required tight control to keep the dog in sight and handlers tried to put their dogs right on the bird. There were pitfall throughout the length of the shore.It took about 4-5 minutes for early dogs.

As the series progressed, scent built up on the far shore and some later dogs trailed to the blind area and it was easier to control them when they were caught by scent. Later the weather became cloudy with a cold, damp wind, however dogs handled the water entries about the same way.

Work remained fairly constant with some having a few whistles, while others had 6-8.

The test could not be completed by dark and was suspended at 4:55 pm after dog 26 returned to line. Eleven dogs were left to run in the morning. There were no partial call backs, one test dog would run at 6:45 am Tuesday. The starting dog would be #27. A water triple was on deck for #5.

Purina sponsored a banquet after the last series at the Busch Headquarters. The food and hospitality was wonderful. It was well attended by cold, hungry participants who really appreciated the event. Thanks Purina!