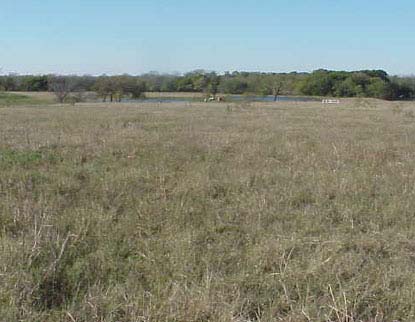 Test 3 - Water Triple, Two Retired Guns
Monday morning arrived frost covered and clear with temperatures about 20 degrees. A handful of spectators were at the suspended Sunday tests before dawn. A solitary test dog ran about 7a.m. in marginal light. The sun rose swiftly and by the first running dog, #53, it illuminated the site. The remaining nine were run by 8:15 a.m. and all dogs were called back to the third, a water triple at Judd Little's ranch about 10 minutes north.

The line was in a pasture which rolled  gently down to a group of ponds below. Beyond them, the land rolled back up. The first set of guns were to the left, high on the far hill. They threw a dead hen pheasant flat to the left where it fell in medium pasture grass about 300+ yards from the line. A second set was located in, closer to the line, to  the right of the first set. They were stationed on a point of land protruding from the far left side of a small pond. They threw another dead hen pheasant flat to the right, across the water to the far shore. It landed on a grass covered strip of land about 175 yd. away. The strip divided the previous pond from another, much larger one. to the right. The third, flyer station guns were located on the near side of this larger pond, a good distance farther to the right. They shot a flying mallard angled back to the left an sluiced it after it landed in the water about 190 yds. from line. As the dog was sent for the flyer, the two dead bird stations retired to brush blinds near them. The order was: left, middle, right. The wind angled back from left to right across the test. The dogs were run just before 9 a.m. and each clearly illustrated the hazards.

The shot flyer converged with the difficult middle mark and distracted dog's attention. A few tried to pick up the middle mark second, but when it proved unsuccessful, later handlers tried to recover the outside marks first. This was only moderately successful. There was a large expanse of grass covered hill between the left and middle mark. A number of dogs were attracted to this "alley" and arrived at the long left mark behind the guns. Others took a good line, but went between the guns and mark. Both had to shop for the perhaps unexpected pheasant. A few handled.

The most challenging bird was the middle one. It's placement lured dogs into channeling down the water between gunners and mark. The wind prevented them from scenting the  the pheasant on the shore a short distance to the right. Handlers tried to send their dogs  right, down the spit of land where the bird lay, but dogs seemed unwilling to do that, opting for the water instead. Once on the far shore, they hunted behind the guns in a widening and fruitless search. By mid afternoon, only about a half dozen dogs had completed the series without handling on one of the retired marks.

After dog 45 ran, the test was suspended as light was rapidly failing (5:20 p.m.). Thirty five dogs remained to run on Tuesday morning. The marks had been unforgiving. There were three pick-ups, several double handles and all but 7 or 8 dogs had handled on one of the marks.  No partial call backs were given and the test was due to resume at 7 a.m. Tuesday. The Fourth, a water blind, would follow on the same property.