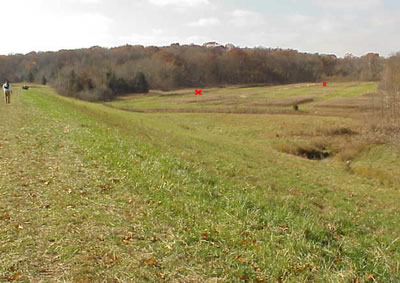 Test 2 - Double land (Some water) Blind
Morning arrived partly cloudy, cold and with little wind. Temperatures were in the low 30's at 6 a.m. By the time most arrived the test, a double land blind through the previous days marks, were nearly ready. The line had been moved back toward the gallery about 30-40 yards. The left blind (to be recovered first) was located in the green strip to the far left of the retired gun blind. It was a dead rooster about  285 yards from line. The second was to the right, located on the edge of a green strip, tight to a point of higher brown cover. It, too, was a dead rooster nearly 325 yards away. Both were marked by an orange stick..

By 6:50 it was light enough for a test dog and Marty was called to line. He experienced two rough blinds. The next dog fared even worse and never recovered the right blind. Those graphic demonstrations had a sobering effect on the observing handlers. The show went on, however and at 7:22 the first running dog, # 43  stepped confidently to line. He and several following dogs produced unexpectedly good work.; but alas, it was not to continue.

To recover the left bird, dogs had to angle down the fairly steep dike and pass through the cover lined creek. The line continued through a green strip and the higher patch of brown cover where the retired blind and all it's scent stood (That is were the planter hid). From there it went into the far green strip where a good number of dogs had hunted the previous day and where the bird lay.

The right blind bristled with hazards. The line went down the dike, through two small water areas surrounded by heavier cover, then through the cover lined creek into another green strip. It then slid close to a patch of higher brown cover into an area of green cover with a point of less dense, lighter brown cover behind it. The line went through that point where the bird lay , just on it's edge in short green cover.

On the left, the dog had to hold a good line while angling down the dike. Some tried to drop off while others went high, toward the previous flyer mark. Once to the creek, they could square it and also go off line. A real danger was through the heavier cover where the dog could not be seen for some time. The old scent and planter in the blind caught some dogs. and they would exit the cover in unexpected places. When in the shorter green strip (where the bird lay) others would not heed the whistles and/or handles requested, similar to yesterdays mark and refusals - some were out of control to near failure.

The line for the right blind was almost a a straight shot off the line but the two patches of water at it's base deflected dogs from their line. Early, many dogs tried to "coon" the area, but once the sun came out to illuminate and warm the area, the work was better. The next challenge was the creek as there they could square it and come up off line. Some wanted to go to the right and had to be quickly corrected. Not many were tempted by the higher cover on the left. However dogs appeared unwilling to handle once in the green. That problem  was magnified at the end of the blind. Dogs would miss it on the left, then go out of control, refusing whistles and casts. A number had excellent initial lines only to have a horrendous end. At one point 3 out of 6 picked up and a number had very loose work. Control at a distance could be a problem.

One of the problems could have been that when the dogs looked up to the top of the dike to locate their handler, there was either a sun glare behind the dike or a cloudy whitish sky to obscure the handler.

By mid morning the day became warm and sunny with temperatures rising to the mid 40's. Again the quality of work seemed to go in streaks. Several very nice jobs, then rough ones.