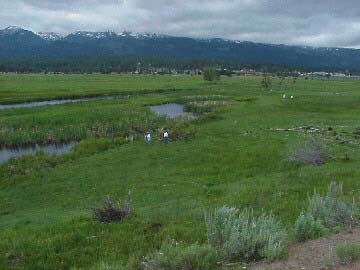 The next test was a water triple run in a heavy tulle pond near Cascade. The first bird, a dead hen pheasant, was thrown from right to left, landing on a dry spot just behind heavy tulles, approximately 140 yards. Bird No. 2, a dead hen mallard, was thrown also into heavy tulles, about 50 yards, with the gunners retiring behind a brush blind. The flyer, a hen mallard at about 20 yards,  was thrown to the right.  Dogs showed a tendency to cheat the tulles on the long, right-hand bird and hunt in the open meadow behind the guns. They also overran the short retired gun, also thrown into heavy tulles, and had to be handled back into the bird area.

There were several 'no birds,' which added time to the test. 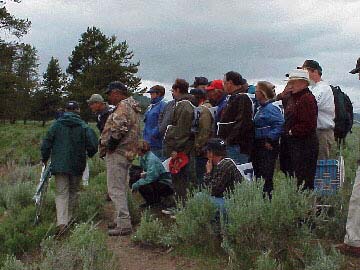 "Dogs may think they recovered the middle bird when retrieving the flyer because of the converging mark effect.  They then ignore the middle bird and try for the long one."

"Lots of praise for yesterday's first test.  The only real critique was that the gunners sometimes faced the wrong way."

"HAPPY 41st WEDDING ANNIVERSARY, MEL AND JOAN MILTON."  This is the first anniversary that they haven't been together.  Next year!!!

"Second short mark had very difficult scenting conditions.  Hard to see the dog to handle on the center bird."

"The flyer's only consistency was its inconsistency.  The location where the flyer gunners and throwers had to work did not lend itself for a good back swing or a real power throw."

"Tulles and cattails trail up; it's just not going fast enough."

"They wanted a six minute test, and this one's taking nine."

"The long bird winded well.  The middle bird did not wind at all."

STATISTICS FROM THE FIRST 25 DOGS:

The test concluded at 8:25 PM, with six dogs left to run on Tuesday.  No partial callbacks were given.  The next test will be a water blind at the same location.