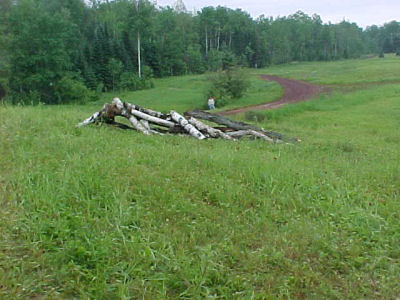 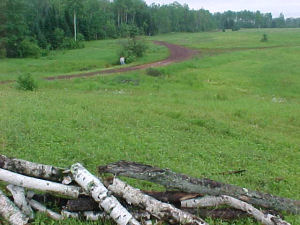 Test 2 From Line Mat
During the evening, strong storms passed through the area. It was still overcast and threatening as dawn arrived. Upon arrival the grounds, already wet, were absolutely saturated. It was mild with temps in the 60's and little breeze. Since Test 2 was scheduled for the same area near Buhl, there was no caravan

At 7:30 a double land blind was nearly ready for the tests dogs to try. The previous line had been moved a few yards to the right and the blinds were placed toward the tree line. The lines to both were tight to the brush/fir tree near the bottom of the hill. The short one lay at the base of it on the left while the long one passed it on the right, crossed the dirt road in two places and terminated at the base of a tree on the tree line. Both blinds were rooster pheasants and marked by a red ribbon on the tree where were planted. The short one was about 100 yards ; the long one, nearly 200. A short distance from the line, on the path to both blinds,a pile of birch logs were stacked. A light to moderate switching wind blew toward the line from left to right

Handlers were instructed that the dog must be on the mat for sending; once you leave the blind you are on your own; you can move up to the birch log pile to handle and you could not move in an intimidating manner toward the dog if he stopped.

At 7:30, test dogs tried the series demonstrating the hazards. By 8 a.m. the line was cleared and the first dog, number 12 stepped from the blind.

Not everyone was successful in getting their dog over the log pile. Some went toward the previous flyer while others tried to return to the retired mark. A side hill line and curving road made a straight line difficult to maintain. Another small brush pile at the bottom of the hill could also deflect dogs. Most recovered the short left one with 1-4 whistles - some virtually lined it.

After retrieving the short one, some dogs seemed hesitant to pass close to the bush again and flared right Since the line was through the cover to the left of it, running down the road or squaring the cover across it was not a wise option. A few dogs did not seem to get the blind "picture and it too numerous casts to arrive at the bird.

The test took about 4 minutes per dog and was completed at 2:05 p.m.after dog# 11 returned.

Callbacks came relatively fast as Test 4, a water blind with a dry pop was organized. 89 dogs remained in competition - 8 had been lost. They were: 6, 17, 24, 33, 59, 64, 74, and 100.
TEST 3 - WATER BLIND WITH A DRY SHOT
The line tent was moved down the hill to the left and across the road. It faced a field that sloped down to a pond. A short distance from the line a dirt road ran parallel it. Across the road, on the right was a high ridge behind which a dog could disappear . Beyond it, on the right, at the edge of the shore a single gunner fired a dry pop and sat down. Handlers were told they had to send their dog from the mat and could move up to the near side of the road to handle.

The line to the blind went over the road, just to the left of the ridge and down to the water. As the dog went past (or over) the ridge, he clearly saw the gunner. The line continued well to the left of the gunner and into the water. Beyond was an island on the right and a point on the left. Once past those two obstacles, the dog had to drive up the far shore to the blind, a rooster planted in front of a small bush marked with red about 185 or more yards away.

Some went too far right, lured by the dry pop, while others went left, trying to take the water "fat". Both were off line and early correction was needed. On the right, a dog could disappear around the mound/ridge on the far edge of the road. That was also possible on the island. It had heavy cover and if a dog refused a cast, he could reappear to the far right. Once over the island the dog had to re enter the water,go over a point and back ito the water o the far shore. A number tried to run the shore instead of bailing back nto the water

The Judges decided to run until dark since they could not finish the test on Monday. At 9:05 p.m, the third was suspended after dog # 21 returned. There are 15 dogs to run in the morning. Dog 22 will start and no partial callbacks were given.