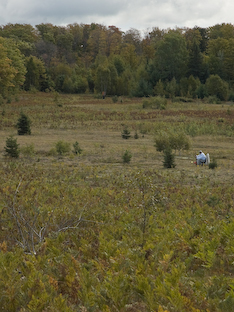 The weather had changed by mid morning and we had a mixture of sun & cloud with winds out of the NW at 20km per hour.

The test site was 27 km from the last test but as usual the setup and Marshalling committee had everything ready to go upon arrival. The field was outstanding and huge. Beautiful rolling hills covered in a mixture of short grass, medium areas of cover composed of ferns, clumps of small bushes and evergreens.

There were 2 binds and handlers were instructed to pick up the rt. hand short blind first and then the long blind. The line was situated at the top of an embankment that sloped down at a steep to moderate pitch where the terrain then flattened out. A dry shot at the beginning of the test. The test ran from NE to SW.

Short Blind - It was angled down the embankment to the left. The embankment was covered in ferns and sprinkled in small pines and trees. The land then leveled out to short grass and the bird, a hen pheasant was placed in front of a small fir tree at a distance of 122 yds.

Long blind: Was straight down the embankment thru the cover (there was a couple bushes about 20 yd's out, on line to the blind). Then down onto the flats past the gunner who fired the dry shot. He was located about 25ft to the rt. of the line and 78 yd’s from the start of the blind. There were several strips of low cover until the entered the low cover about 70 yd's from the bird. The bird was planted in the low cover in front of a clump of trees & bushes, it was a drake pheasant. The distance of the blind was 287 yds. 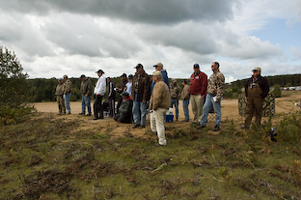 Watching the test dog
Test Dogs: There were 3 test dogs run staring at 11am. They were the official test dogs and Mr. Greg MacInnes and his dog # 62, Moira River Maddy. When they ran the test had a poison bird thrown by the gunner landing close to the line and under the arch of the long blind and to the right of the short blind. All 3 test dogs did a fine job of retrieving that bird. The test was then changed to a dry shot. The first running dog started at 11:30am. There were a variety of jobs done on both the long & short blind.

Terrain remained the same. I can’t say enough what a beautiful field this was! The test was facing south and the wind had increased to about 35m/per hour. It got quite cold (felt like it would snow) we had a few brief periods of rain showers.

The line was located at the top of a ridge with a gentle slope down into a gently rolling valley and backup some small hills at the end of the field. There were a few times the dogs disappeared from site going over a knoll but just for a brief time and the situation of the line provided the handlers with excellent visibility to handle if need be.
The Test: 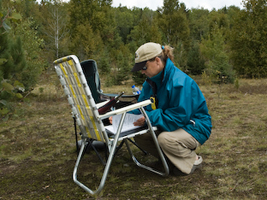 Test 8 running order
Bird # 1 – was located in the rt. center of the field at 341 yd’s, It was a cock pheasant thrown angled back into some of the fern cover at the top of a hill. It was thrown to the Lt. Bird # 2 – Was located on a hill in the LT centre part of the field, up on a hill. The mark was thrown at a distance of 311 yd’s from the top of the hill to the rt. down the hill in front of a clump of medium sized trees & bush. It was a cock pheasant and the hill was covered in ferns. Bird # 3 – Right hand retired gun situated in a small gap ringed by trees at 242 yd’s. A cock pheasant was thrown angled back to the left into short grass. Bird # 4 – The GO bird was situated to the left at 151 yd’s to the LT into a clump of cover backed by short trees. It was a hen pheasant.

The first running dog started at 2:55pm, dog # 60. It proved to be a very difficult test with 13 handles which included some double handles and a few pickups.

ONCE AGAIN “THANK YOU TO PURINA” for the complimentary breakfast