Another cool, partly cloudy day was on deck for the stake. Temperatures were in the low 40's  with little breeze. Rain was predicted for later in the day to continue until Saturday.

At 6:45 the only test team - Glenda and Willow illustrated that the test was similar to the previous day and handled. The wind had switched a bit and angled back from right to left across the test.

At 7 a.m. dog 27 resumed the series. The two retired marks remained dangerous, but the long flyer presented problems also. It was so far away that some handlers selected the retired mark or mark(s) prior to recovering it. A number of wide, loose hunts occurred. Occasionally, a dog  was sent for the long bird second and would would work it's way to one or the other retired marks instead.
Some dogs seemed completely confused and the handing was pervasive again.

The last dog, #54 returned from line shortly after 9 a.m. No dogs broke on the honor.

The line mat was set on a cut hay side hill overlooking the left tip of a pond. It had a small point protruding from the left and a dike between its far shore and a small body of water beyond. Two gunners were on the shore to the far right with a decoy spread was in front of them. They shot twice and then sluiced the water.
Test 8 Water Blind from line- Close up to illustrate detail  (planter standing by bird)
The line was a short distance to the water and went down the hill, across a gravel road and fairly steep bank. It continued into the water, across a point, then back into the water. From there it went to the dike, crossed it  and back into the water, then terminated a short distance up the far shore about 221 yards away. It was a dead duck marked by a dark patch.

The sluice did not seem to affect the dogs too much. Most had several whistles to get to the dike - mainly to set the dogs on and off the point. It took a couple more to get them into the far water and up the shore to the blind. It took about 7 minutes per dog. There was a pick up point to the far left of line  where the dog returned via land.

Some of the dogs stayed quite wide out into the water, but the true line hugged the shore. A few seemed reluctant to land on the point and re enter the water to the right. A few boxed their dogs around at the end. The test ended when dog 85 returned to line at 1:30 p.m.

A move was made to a field near the first day's series. As contestants arrived, callback were announced. Twenty one had survived and four had been dropped. Those lost were: 11, 14, 33, and 36.
Test 9 Land Quad, 2 flyers, 2 Retired Guns and an Honor 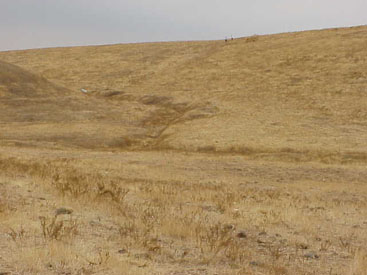 Close up of middle two retired guns- one at left base of hill, other to right, on top of hill
The 7th was a big land quad with two shot flyers, two retired guns and an honor. The line was on a hill overlooking a draw with high, rolling hills beyond. Four sets of guns were positioned on the far hills at nearly a 160 degree spread. The outside two were flyers ( left rooster; right duck) and the two fairly tightly converging middle marks were pheasant hens. Both middle guns retired as the dog was sent for the first flyer. Test dogs demonstrated the series at shortly after 2 p.m. After they ran, Judges moved the left flyer to the top of the hill and moved the mats about 15 yards to the left. The order of the throws were also changed. The new order was: Middle right long retired (297 yds); left flyer ( 260 yds); left middle short retired mark (237 yds); right flyer (170 yds). I took about 8 mpd to complete.

The flyer falls were well ridden out and fell in sparse, but expansive pasture grass. Several dogs shopped to find them, especially on the left flyer. They appeared influenced by the memory of the two retired birds. Some ran behind the guns and hunted for the bird while other charged up the hill with a solid mark. The middle, converging marks were the most troublesome. Some dogs blew through the short one and either hunted their way to the far one, or checked down and recovered it, or hunted their way behind or up the hill back to the left flyer. Several handles occurred in the first 1/3 of the field.

An intermittent rain fell shortly after the test began and by 4:30 it was too dark to continue. The test was suspended at 4:40 when dog 5 was excused from the honor. A test dog would run at 7 a.m with the first dog, #8  shortly thereafter. Nine dogs were left to run. This test would be considered number 9 with the fourth series double blinds as 4 and 5.