A much cooler , cloudy day arrived on Friday morning. It was in the 40's with a brisk wind and higher humidity. Test seven was in place and ready to go by 7 a.m. Seven dogs had run the previous day leaving 19 for this morning. ( A correction from the web report. Dog 32 had been reported a dropped when she was not Also dog 60 should have been shown as dropped. Sorry for the error.)

At 7 a.m. the only test dog illustrated that the test was substantially the same although it was a bit more downwind than the day before. Shortly after the first running dog stepped to line to initiate the balance of series seven. Once again it could a problem getting dogs on and off the two points in play. Some tried to duck behind the last one and handlers ran to and fro trying to keep them in view and under control. By 10:10 the seventh was completed when team 62 was ferried from the distant pick up point. 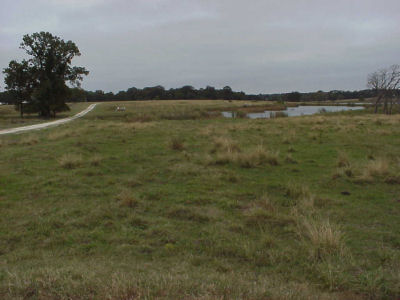 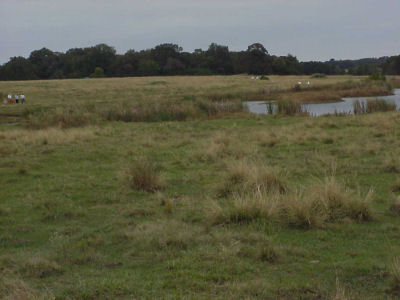 Test 8 - Closeup
The test was forming as participants arrived. The line mat rested on a hill overlooking the left end of a pond. The land rolled down to a cattail filled wet area then gently up beyond. Across the cattails a short way up the hill, a live gunner station was positioned. They shot a flying hen mallard to the right where it fell 110 yards away.. A good distance to the right, another station stood along the far shore of the pond. They shot an threw a dead duck, back right where it fell in the field 160 yards away. Deep behind them and to the left, a third set also threw a dead duck  but angled it back to the left. It landed in the pasture 190 yards away. The order was; Far middle bird, right bird, flyer. It took about 12 minutes per dog, more with hunts which was the case for some. As the dog was sent for they flyer, the other two retired.

After the first few dogs, it became apparent that this would also be a challenging set of marks. Dogs would be out of sight for substantial periods of time while in the cattails or beyond, behind the berm of the pond. Some would square the shore and go off line on their way to one or the other retired marks. Usually they would recover, but some didn't - those needed handling. The flyer was no "gimme" either and two were caught by it, either handling or picking up.. There were several no birds and one dog earned a rerun when he was distracted by a live duck landing in front of him on his way to the last mark.

A land quad with 2 shot flyers would be the ninth. It would begin at 7 a.m. with dog 19 starting.