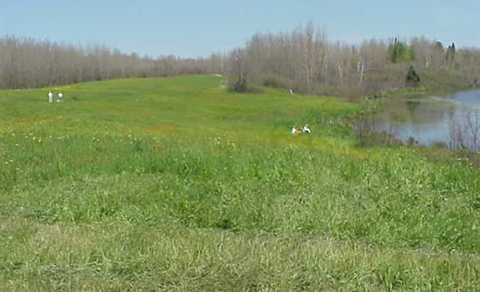 Test 7 Water Blind - Test 8 Land Blind
Once again contestants woke up to clear, cool weather. Temperatures were in the lower 40's and there was no breeze. Patchy fog was expected, but there was none in Hibbing at 5 a.m. While traveling toward Virginia, patches of fog became more frequent and, upon arrival, the club grounds was socked in with pea soup thick fog. A 6:30 test dog quickly became history. However, the fog burned off by about 7 a.m. and revealed a double blind in a field southwest of the clubhouse.

The line was located on top a hill overlooking an undulating, grassy field to the left and the shoreline of a large lake to the right. There was a dirt road winding its way through the field on the left while a set of decoys rested a bit offshore on the right. One set of guns was located in the far left field. On the right shore a set of live bird gunners were positioned.  The scenario was: The handler arrived on line and was given a few seconds to settle his dog before the judges called for the left, dry pop. Handler was given a number and had to recover the water blind first.( Dark spot near shore past point.) When he delivered the bird, Judges again waited a short time for the dog to settle before calling for the right guns to shoot a flying duck to the right where it splashed in the decoys possibly 40 yards out Again the handler was given a number and the dog sent to retrieve it. Once back at the line, handlers were on their own to recover the land blind (Indicated by planter at stake seen above right gunners heads.) The land blind was a duck planted before the test began and the water blind a rooster placed on a  shoreline hummock. Test dogs ran about 7:10 with the first competing dog, #22 on line at 7:45 a.m.

To recover the water blind, dogs had to angle down the hill and enter the water in front of the live guns. The line was close to the shore, touched a point then continued into the swimming/lunging bay beyond. The pheasant was about 207 yards deep. It was difficult to keep the dogs on line as suction from the dry pop pulled them left. It was also uncomfortable to pass close to the gunners and skim the shoreline on the right. As they arrived at the point, a swirling, intermittent wind wafted scent over the water and a number took a quick left  behind it where they could easily disappear into the thick cover. Those that did usually appeared near the planted land blind and handlers frantically tried to cast them back into the water. Some succeeded, but at least 4 did not.

On the land blind, the flyer provided additional suction back to the right, however, many dogs remembered the dry pop and flared left when sent for it. Some see-sawed between the attractions, a few refusing whistles that could put them back on line. Both blinds produced a profusion of handles and, combined, took about 10-11 minutes to complete. Tests eight and nine were completed about 2:25 p.m. and participants were directed to a field across the road they arrived from to wait for the callbacks and view Test 9, a water triple.

Call backs came promptly and 26 dogs remained to try the ninth, an in line water triple with a long retired gun
Those dropped were: 17, 19, 23, 30, 42, 66, 81, 92, 99, 103, 104, 105, and 109. Dog #44 would begin.
Test 9 - Water Triple with Retired Gun
It was hot, breezy and sunny as participants arrived at site nine. The test was in place and ready to go.  Right after the callbacks came, announcer Bob Sabbann quickly called for the test dogs, but contestants had been held by the traffic committee until after the callbacks were announced as parking was tight and it would be hard to exit once in. Unaware of the situation, Judges had him announce "handlers to the line" Some came running, while others quickly tried to park. Soon all returned to "normal" and about 3 p.m., test dogs demonstrated that they were able to complete the test without handling. It took about 16 minutes to complete.

The line was located on a dirt road that faced an irregular pond studded with islands, points and penninsulas. Three sets of guns were positioned in line on the far shore. All throws were to the left and the order was: left, retired bird; middle mark, right flyer. All were ducks. The far left bird fell near the shore line about 250 yards away. The middle bird was 150 yds. +  and the flyer, 100 yards. The flyer was thrown 90 degrees out from the guns and fell in weedy water.

The test began about 3:30 with dog #44 and the first four or five dogs completed it with a moderate hunt or two. The test could not be completed before dark and was suspended with 13 dogs left to run. It will resume on Saturday morning - one test dog at 7:30, first running dog at 8 a.m. No partial call backs would be given.