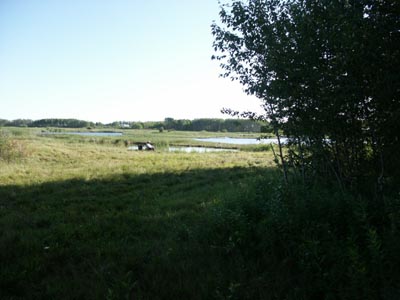 Test 7 - water blind with poison bird
The water blind was a distance of 176 yards. There was a poison bird thrown left to right on land approx 30 yards from the line and the line to the blind was through the arc of the poison bird. The line then proceeded through a small body of water, over a finger of land and into the main body of water. There were decoys to the left at approx. ½ way to the blind. The dogs then had to be handled through a small channel with points on each side and back to the shore, with a point on the left very close to the line.

Test dog #1 Call Me June’s Pretty Penny handled by Denise Hays came to the line at 8:05 am and demonstrated some of the hazards, particularly at the end of the blind.

Test dog #2 Bluenorth’s Alces Americana handled by Ed Zeerip had difficulty with the tricky end of the blind as the channel is narrow and the dog can quickly get out of sight.

Although this appeared to be a fairly straightforward blind, it had many challenges. Some dogs once in the first pond past the poison bird checked back toward the poison bird. The first crossing on the muskeg vegetation allowed dogs sight of the 4 decoys closer to shore. These decoys were substantially off line. An ever increasing cross wind proved very challenging. Trying to navigate the far very narrow channel was dangerous as the dogs quickly disappeared behind 2 converging points. There were three dogs picked up.

The contestants and workers alike enjoyed a delicious breakfast compliments of Nestle-Gamble/Purina and served by the Inis Catering Service of Balmoral. Purina provided a pancake breakfast yesterday and French Toast this morning and Denver sandwiches for Saturday to start everyone’s day off right. 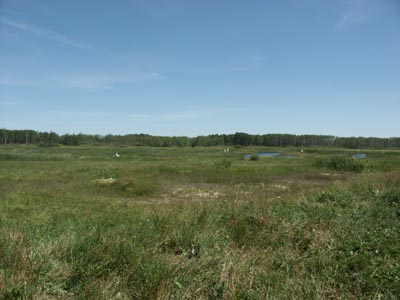 The first test dog at 1:05 pm, Bonnie’s Solo Grand handled by Rod Spence. The second test dog was Bluenorth’s Alces Americana handled by Ed Zeerip. Both test dogs amply displayed the challenges in this test. They both had to be handled and one winded the far right bird when enroute to the retired bird.

The quad was picked up in a wide variety of ways. It became apparent that the cross wind could be very dangerous. The first running dog also winded the right bird from the retired station and too late for the handler to handle. This caused much discussion in the gallery as to how to pick this quad up cleanly. Some tried the two outside birds first and then a variety of either retired 3 rd or visible third. Some successfully got the retired second. Later dogs had a wind switch and would wind the retired from the left bird station. With the amount of islands in the pond, it was not a friendly place to handle in, as the dogs would quickly disappear and not be seen for lengthy periods. One never knew where they would reappear. Test #8 concluded at 7:15pm.  This test site was sponsored by Keystone Ford of Winnipeg.

Contestants and workers enjoyed a lovely Taco dinner supplied by the Golden Retriever Club of Manitoba.